The three armed bandit sits in the shade, curious for such a little one. He looks around with his hungry stomach, waiting for the hunt to begin. The hunt is still far off, we're not even sure if it will begin today. He looks on with his tiny reptilian eyes. I wonder what lurks behind them, is he capable of feeling all that we can? I know he can display affection as he nuzzles when he's sleepy and desires to be around us at all times. His comical leaps towards the glass in an attempt to escape provides humor until we feel bad enough to let him out. I love him, something new for anything without hair, and in his tiny heart, I'm sure he loves me too. I'm taken by him and his discovery of new things. Watching him stare out the window with such fascination, it's amazing. I stand in awe of such a tiny lizard. So here's to you Dante. 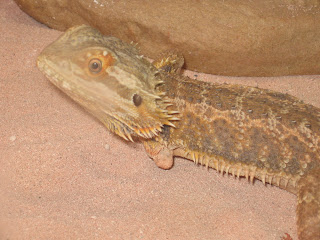