September 07, 2009
So I've finally returned from a week long stay in the land of sun.  Not the rising sun, the one with the fruits and nuts.  I have mixed feelings coming home.  Granted its comforting being back in familiar settings, but there's nothing unexpected like out there.  I'll miss spending the day at the beach, taking naps to the soothing sound of the ocean.  I'll miss the family we keep out there most of all.  The only consolation is that fall is fast approaching, as hailed by my having to put on a sweatshirt.  Halloween is just around the corner and you can't celebrate the greatest holiday in sunny 85 degree weather.

There was good and bad, ties strengthened and others broken, but I choose to walk away with the positive.  There was much of it, starting with seeing old faces at the airport.  It had been far too long and I'll make sure it won't be as long this time.

We took in the sights starting at the zoo.  It was 100 degrees and by the end we had to scrape the joy out, but I wouldn't trade a moment of it for anything.  Supposedly it was the best zoo outing many of us had as nearly all the animals were out for viewing.  After six hours of walking, we had seen everything and then some.  I saw many animals for the first time, including pandas and snow leopards.  The best though, was this sleeping lion: 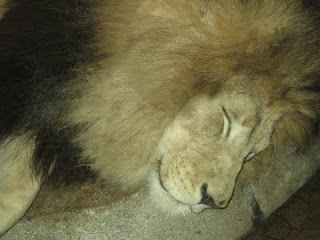 The next morning we left San Diego for Huntington Beach.  We eneded up stranded, but turned it into good.  We spent the next few days in the waves and sand soaking up the sun. 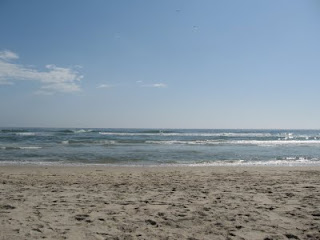 The surf was amazing, but harsh.  I managed to stand on the surf board for a millisecond before it popped up from under me and landed on my head with a resounding thud.  It was then that I decided to stick with the boogie board and I now understand why everyone out there has one.  Small and easy to use with immediate payoff.  I was also attacked by a small crab.  By small, I mean it was newly hatched with it's shell still being translucent.  When we weren't at the edge of paradise, we browsed the local shops and took in the culture.  At night we retired to family for nights filled with laughter.

Upon returning to San Diego, I took to the sky.  By which, I fell 13,000ft at 120mph.  It was the single most exilirating experience I've ever had.  I wasn't nervous until I actually entered the plane.  As we took off and began to climb I was able to calm my nerves.  But when we reached to peak and the door opened, I began to quietly panic.  The bodies flew out and as I inched closer I immediately regretted this decision.  Just so you're aware, the tea cups at local carnivals make me sick.  I'm a sissy, I know.  My instructor told me to place my feet at the edge of the craft and as I was doing so, he flung our bodies out with me not ready in the slightest.  My stomach lurched into my throat and I prayed that I would pass out if the entire fall was like this. 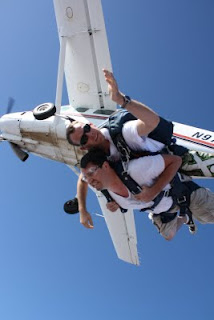 Two seconds later and we were up to speed with my fear far behind. 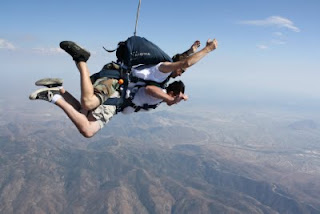 The freefall was spectacular with the view making up for any discomfort.  Before I knew it, the chute was opened and we were gliding towards the earth.  Even though I'm positive I'd feel sick jumping out, I'd do it again in a heartbeat.  There is nothing quite like it, even if you do have another person strapped to your ass.

Suddenly the trip was over, and we had to endure eight hours of travel to get back home.  I was sad to leave, but that just gives me resolve to return as quickly as possible.  Thank you to everyone for housing us and feeding us.  This is by far the best vacation I've ever had and we'll make sure to see you soon.

Ryan said…
Heck yeah! It was a blast. Wish you could've stayed longer. We have a little more room than that little apartment now. Your skydiving pics crack me up every time.
Love you man. Can't wait to see you again.
November 1, 2009 at 2:06 PM