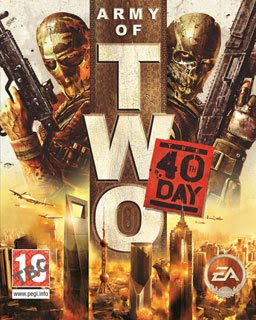 Army of Two was the second game I had picked up for the 360.  Being new to the system, Kim and I wanted a game that we could play together.  After browsing the catalogue of games and looking at the reviews, we decided to give it a whirl.  We had never played a third person shooter like this before.  Sure, I had beaten all three Devil May Cry games, but we were of the RPG standard.  Long story short, we had a blast.  This was a game that we played for nearly a year, until the sequel came out.  As it turns out, lightning rarely strikes twice.

What had sucked us in with the original title were the titular characters, Rios and Salem.  Their comedic banter and camaraderie made us fall in love with them.  Here were two guys, caught in a shit storm of epic proportions, laughing and playing air guitar.  It had been a year, so we were eager to see how time had treated our two favorite mercenaries.  It seems that in the time in between games, Rios and Salem started chugging as much bleach as possible and repeatedly slammed their heads into a wall.  In the sequel, we were treated to a Rios who has sex with pandas and a Salem who isn't so much a guy who talks about rap artists to relax in a firefight, but a sadist who cheers on Rios with every headshot.  I'm all for dark humor, but these were not the characters or game to do it.  They lost a vast amount of personality and that lost me as a fan.

The game takes place entirely in Shanghai.  Fifteen minutes into the game, the entire city is blasted back to the stone age by an invading mercenary force.  You spend roughly five to six hours slogging through rubble and smoke filled streets.  There are a few highlights, such as a zoo, and well, nothing else leaps to mind.  It all looks the same for the majority of the game.  This is a shame as the previous title had you trekking all over the globe with each location looking vastly different from the last.  Not to mention, there was so much more to do in the last game, including driving sequences and parachute entries.  Now, you move from one gray blast zone to the next taking cover and eliminating all in your way.  Along the way, you'll encounter civilians to rescue, though this is nothing more than killing the bad guys before they can execute the innocents.  There will also be a few instances where you are forced to make a decision, but it doesn't seem to matter what choice you make.  Playing through the game as either a saint or harbinger of death doesn't make any real impact.  It all comes down to the final choice you make in the game.  But even then, it's a nearly identical ending.  What threw me was the fact that to get the good ending, you must kill your partner.  That's right, for the GOOD ending, you must put a bullet in the person who just spent five hours killing countless bad guys with you.  Really, this is just terrible writing.  I had no idea what was going on as I played the game.  Nothing is explained to the player and the endings made no sense at all.  Horrible.

The highlights to this excursion are indeed the combat and weapon customization.  The controls were slightly changed for the better.  My only complaint is that the A button is tasked with too much.  Hold it to run.  Press it to interact, take cover, or roll.  Hold it to grab your downed ally and revive them.  Often times, instead of grabbing Kim while she was down, I would leap over the cover she was behind and run five meters before stopping my rampaging character.  Beyond that, combat is exactly the same, nothing new at all.  Weapon customization is upgraded for the most part, allowing for a greater variety of options, except for the handgun.  I can't figure out why I had so much more available to me in the first game.  There were easily 10 different guns.  Now there's only three.  And for customization?  Put a silencer or enhancer on it.  Only one gun allows for a larger clip.  I felt extremely crippled by this as when my primary weapon ran out of ammo, I was reduced to the crap the enemies drop or my pitiful excuse for a side arm.

As for multiplayer, I couldn't tell you much of anything as I haven't tried it yet.  I was excited to see a horde mode ala Gears of War, but that won't unlock for another month.  It is currently only available to people who preordered.  That strikes me as incredibly stupid.  Nearly as dumb as ODST's firefight mode not having a match making service.

Much like the first game, it's best when played with a buddy sitting next to you.  Sure it can be played online, but this is a game that promotes team work and strategy to succeed.  You will be making maps with your hands, raging when your partner screws up, celebrating victory over a tough encounter.  All of this can be done with an AI partner, but it just feels hollow.  Sure it has been upgraded from the first game.  I'm no longer dead in the water when I become injured, but now my partner stands far behind me and lets me do all the fighting.  It's not much of an upgrade.

While we had greatly enjoyed the first game, The 40th Day was such a disappointment.  From the story to the near retardation of Rios and Salem, this one is nothing special.  Even diehard fans will find this latest entry lacking.  From the game play to the "good" ending being the one where you kill your partner, this is a sad note for what could have been a great series to end on.