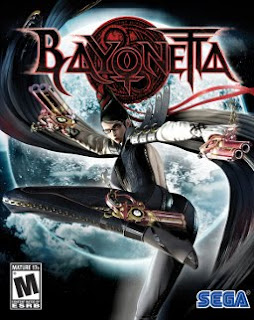 When I had first heard of Bayonetta, the entire idea seemed well…stupid. What drew most of my anger was the idea of guns strapped to the heels of her shoes. How was she supposed to fire them? Wouldn’t the momentum of a shot fired by foot completely throw her off balance? This would only be the tip of the ice berg. Soon, there was a ridiculous amount of coverage for what I was sure would be a mediocre game. Day after day, week after week it continued. I was sick of it. Not only was there gun shoes, but she was completely out of proportion. Her head was tiny, her legs stretched on forever and she had hands larger than a gorilla. It was all too much. Then came the day a demo was released. I was curious as to how bad this game would be with such ludicrous ideas behind it. I started it up and 15 minutes later I played it again. Then I played it again.

What was supposed to be one of the worst games I had ever played turned out to be one of the most enjoyable games I have ever seen. It’s just fun. There’s no two ways about it. From the over the top style to the bare bones game play, it’s a blast. Bayonetta comes from the mind of Hideki Kamiya, the director of the original Devil May Cry. It shows in nearly every aspect of Bayonetta. This was the feeling I had when playing the demo. It felt like discovering DMC all over again. Before the series started to take itself too seriously and wound up another bland action game (see entry #4).

The action oozes style and grace as Bayonetta dances around the screen dispatching her heavenly foes. As with DMC, this is a very combo heavy game. Unlike DMC, everything flows like a well orchestrated dance. You can equip two weapons to Bayonetta, one set to her hands and the other to her feet. This makes for a menagerie of destruction at your fingertips with nearly 10 weapons to choose from. There is no button to block; instead you must rely on quick dodges and a strong offense to keep you alive. When you move at the last possible moment, you will activate “Witch Time” and the world will slow down, allowing you to rack up massive amounts of damage. If you fight well enough, you’ll be rewarded with special torture attacks which deal devastating amounts of damage to foes. All of this combo madness jacks up the amount of halos you receive at the end of a fight. Halos are the currency used for new weapons, techniques, and other assorted goodies. Also standard are the difficulty modes, but you must unlock hard and the even harder, “Non stop Infinite Climax” modes. I don’t play many “action” games like this, but I found hard mode punishing nearly every mistake I made. This has only driven me to get better. I’ll either succeed or this game will break me and you’ll find me loving it all the same.

In addition to the over the top, nonstop action is a fairly entertaining story. What makes it work, however, is that the game never takes itself too seriously. There’s enough to make it work in the context, but there’s so many in jokes and scenes where you have no choice but to laugh along. Broken down, Bayonetta is a witch who must sacrifice angels daily in order to appease the devils who gave her the many abilities she possesses. If she doesn’t, she is dragged down to Hell. Add to that the complication that she’s been unconscious for 500 years and remembers nothing of her past. The game unravels predictably, but is entertaining none the less. This is all because of its ability to poke fun at itself.

There is no multiplayer to be had. Only leader boards and that’s just fine for a game such as this. Even after you beat the game once, you’ll be playing it over and over just to collect all the goodies to be had. I spent around 15 hours on my first play through (including cutscenes) and I didn’t touch the 20% marker for completion. This is a game with phenomenal replay value.

Bayonetta also marks a first for me. This is the first game that I refuse to play in front of the kids. I’ve played plenty of Resident Evil and Dead Space with them watching, but they’ll have to be a little older for Bayonetta. This is because of the incredible amounts of language some characters use and the over the top sexualized nature of Bayonetta herself. I enjoyed both quite a bit myself, but that’s me. Just take note if you have little ones running around the house.

Overall, I recommend Bayonetta to anyone who has lost their passion for gaming amidst all the gray and bland shooters that are dominating the market. It’s a much needed breath of fresh air that makes you take notice of how fun gaming can be.