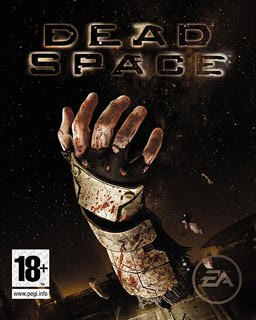 Dead Space wasn't a game that originally caught my eye. I wasn't a huge fan of EA at the time, and I wasn't seeing a whole lot of press, so it kind of slid by on my radar. It took a fight with my gf and her way of saying sorry (buying me a new game) to get me to take notice of this title. What a giant mistake on my part. Dead Space, along with Army of Two, was showing me that EA was becoming a company to take notice of.

Dead Space doesn't reinvent the survival horror genre, but it does show how it should be done. It walks a fine line between dark and quiet ambiance and shit your pants terror. So you may be walking around in the dark and eerily quiet bowels of the ship, but you never feel totally relaxed. And the action isn't so mindless and ad nausea to turn this into an action game. From start to finish, the pacing is amazing. There is seldom a dull moment and those usually being when you check the map to find your way in the labyrinth like ship. Because when you get down to it, the Ishimura is a giant ship. Each chapter of the game takes you to a different part of the ship, where you'll spend a little over an hour doing what needs to be done. All told, you can spend upwards of 15-20 hours with Dead Space.

The plot of Dead Space starts off simply enough. You play Isaac Clarke, an engineer with a repair vessel sent out to find and repair the Ishimura, a ship that mines planets of their resources. Clarke has a little more than a paycheck waiting for him on the other end, as his wife is a member of the crew on the Ishimura. Your crew comes out of hyper space or whatever this series calls it, and the Ishimura looms before you. The massive ship is hailed, but there is only a static filled garbled response. The coms seem to be out, as well as the lights, no big deal. You're a member of a repair crew, you see this all the time. As your ship gets closer though, you notice a field of debris and rocks floating around the Ishimura and then things take a turn for the worse. The pilot pushes past the field, sustaining a large amount of damage to your ship and you come crashing to a halt into the hanger of the Ishimura. Everyone seems fine and you disembark only to find no one on board the monstrous ship. It's dark and quiet. Making your way into a lobby area, you separate from the rest of your compatriots to log into a nearby terminal in hopes of discovering what happened. Suddenly, the lights go out and you see a shadowy form fall from the ceiling into the room with your crew. Blood spatters across the glass separating the rooms and one of your crew is screaming at you to run. Something crashes behind you and you're being chased down dark hallways as you try to escape the thing screaming and chasing after you. Isaac makes it into an elevator which delivers him to the depths of the ship. This is where Dead Space starts.

The game play is something unique. I had never encountered a system like this. There is no pausing to access your inventory or map. There are no life bars or displays of any kind to form a HUD on the screen. It is all done in game. The inventory and maps are accessed from a holo projector on Isaac's chest. His life is monitored from a gauge that runs along his spine. The ammo for your weapons is displayed on the weapon itself when you aim. It was amazing how seamlessly everything was integrated. Most everything else is standard fare. You'll be running around and shooting, solving puzzles and upgrading your weapons and suit as you progress. However not all of this is done in the standard fare. Some of it takes place in space and zero gravity. This is one point where I felt the game truly shined. Once you're in the vacuum of space, all you can hear is Isaac's breathing and the thud of his boots on the ground. It truly makes for a terrifying sensation. Add to that, enemies float about and can attack from literally any direction. It made for quite a few bizarre and tense moments.

Truly, Dead Space is an amazing gem in the genre. It breathes new life into a dying breed. In fact, I believe it was better than Resident Evil 5, which attempted many similar things, but failed miserably. From the story to the game play and the overall mood, you can't go wrong with this game. The controls are nice and tight and the Ishimura gives you plenty of reason to dim the lights and turn up the volume.
Game Reviews