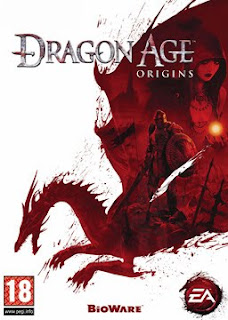 There are a few game companies that I am fiercely loyal to. They are: Square, Capcom, and BioWare. Despite the few times they have wronged me by putting out lower quality games, delaying launches between countries, and a few other minor details, they have produced what I consider to be the highest quality of games I’ve ever played. Yet, only one has never wronged me. Only one company has delivered the highest grade of content consistently. That company is BioWare. So while I was working on yet another Neverwinter Nights module, I caught wind of a new game that was inching closer to release. This game would come to be the pinnacle of their career. After playing through, I honestly don’t know if they can top themselves after this. Unless you’ve been living under a rock for the past quarter, you know I’m talking about Dragon Age: Origins.

Dragon Age is BioWare’s first entry based entirely on new lore. Don’t be fooled into thinking that this translates into a paper thin world. You could spend hours alone going through the bits and pieces of history that make up the world you’ll be spending 50+ hours in. From journals to tomes and explanations provided by your companions, the world of Ferelden is massive. Then you realize that you don’t even explore the entire world. There’s at least another giant nation and the untold miles of wilderness that you never step foot in. All told, this lays a fantastic foundation for BioWare to further build upon and I eagerly look forward to further exploration.

You start the game by choosing you character's class and race. You have the standard human, elf, and dwarf combo thrown in with warrior, assassin, and mage. Beyond that, there are a few choices for variety, such as human noble and dwarf commoner. As you progress you can find tomes to specialize your character's class, or if one of your party members likes you enough, they can teach you. You can do this for everyone in your party as well, giving you complete control of your party structure. Being a single player experience, you need to set up actions for your party to follow as it would be a giant headache to let them run about on their own. There are a few default behaviors for you to choose from, but if you truly want to succeed, you have to program your own. As each character levels, they gain another action slot, so don’t be surprised if they seemed handicapped at first. Despite being able to customize everyone’s action for any given situation, be prepared to pause the game. A lot. This is your key to success and some of the later battles will punish you for the slightest mistake.

Be aware though, that in Ferelden, everyone is out to screw you over. Betrayal and revenge are the name of the game here. Once you move past your character’s origin story, you are recruited by the Grey Warden Duncan to fight a coming war with the Darkspawn. The Darkspawn live underground and every so often find an old god to corrupt and lead them to the surface in an attempt to wipe out the other races. The only problem is there hasn’t been a blight in over 400 years. Despite your clan’s track record, a lot of people are skeptical to your continued worth. After meeting the king and setting up a plan, you brace for the coming Darkspawn army. Fast forward to some more betrayal and you’re one of the last two remaining Grey Wardens. The entire world is against you as it erupts into civil war and it’s up to you to build an army to fight the coming blight. The bulk of the game involves you being everyone’s errand boy as you do everything from exorcising possessed cats to plotting assassinations in the name of raising an army.

90% of the time, this works just fine. But 35 hours in, it starts to get old. Normally I play the light side, a chaotic good kind of character. But towards the end I found myself just saying “Screw it.” I would kill whoever was in my way just to speed to story up. As a heads up to you, the reader, be prepared to put up with a lot of BS from the dwarves. I didn’t have an opinion on the little folk before, but now, I absolutely loathe them. Before you write me off as some racist bastard, play their part of the story last and tell me if you’re not fed up with their garbage 15 minutes into meeting them.

When I found myself growing tired of the grind, I would set up camp with my party and simply talk with them. The writing and interactions that can be had are phenomenal. This is storytelling and character development at its best. Even if I didn’t particularly like a character, it always paid off to get to know them as it would often open up side quests and other perks. The only downfall is that I found myself liking my initial party so much, that I was reluctant to replace them with characters I met later in the game.

As for the DLC that came with my copy of the game, while it didn’t add more than two hours of action per experience, it was still worth it in that the keep and extra character I gained were extremely handy. While I found myself wishing the side quests for each were a little longer, I can’t complain as they were included free of charge. With another piece of DLC being released on the fifth, I can’t wait to delve back into the world of Ferelden.

The only complaints I had with the game beyond the dwarven section, was the loading times. While my PC isn’t the greatest, I was able to run the game at max settings with no visual slow down. Yet, the loading times were unbearable at times. It’s a minor complaint amidst all of the greatness to be found here.

All in all, if you’re a fan of fantasy, be it Tolkien or D&D, you’ll love Dragon Age. From the main story line to the incredible amount of side quests to be had, it’s a pace that hardly slows. This was a game that consumed me for a week straight. Every spare moment I had went into it. Few games can do that anymore. So do yourself a favor and pick up a copy. But make sure it’s the PC version. I can’t imagine owning a classic like this without the controls of a keyboard and mouse. Add to that, the module toolset is only available for PC. So truly, the adventure could go as far as your imagination.