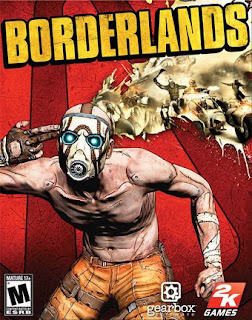 Sometimes, when I’m all alone at night, I think to myself “What would make a great console game?” A MMO of course! Something where you can group up with friends and explore a massive world as you do quests and get new gear! If only someone could bring the feeling of playing a MMORPG to a console. What’s that? They did that back in October of 2009?

Gearbox took every idea I had and turned it into a reality. Borderlands is a game where you and three of your friends can group up to tackle the quests and monsters of the planet Pandora. Along the way you’ll gain levels and find all kinds of ways to kill your enemies with randomly generated guns.

You start off as one of four characters, with each one representing a different class. Mordecai is the hunter who specializes with sniper rifles and can attack enemies with his hawk like pet. Lilith is your siren who acts as an assassin or buffer/controller. Roland is of the soldier class and surprisingly can act as the healer and support backbone to the team. Brick rounds out the list as the bruiser. He’s the meat shield of the crew. Each class has three different branches in their talent tree. As you level you’ll gain skill points to invest in said tree. Each branch is unique and useful in its own way.

The story takes a back seat to the action, but is prominent enough to hold everything together. There are only a handful of cutscenes in the game, with most of them introducing bosses or main characters. Instead, just like any MMORPG, you’ll be getting most of the story from quest logs you pick up or short transmissions from key NPCs. The plot is that your character is a mercenary who recently came to Pandora is search of a legendary vault. It is rumored to contain vast amounts of wealth, power, advanced weapons and…women. Why the women inside the vault haven’t used these items for their own gain is beyond me, but whatever. If you stick to the main story line and ignore all the side quests, the game can be beaten in a few hours. However, if you have a desire to take on everything and get the most out of your play through, it can take upwards of 30 hours. When you finally get to the vault, it turns out to be one of the worst endings I’ve seen in a game. It was just terrible. The only positive, is that your stats and gear carry over to another play through where the enemies are tougher and the loot is better.

Beyond the action and addictive game play, the real draw is the NPCs themselves. Each one was lovingly created and it shows. Every one of them is filled to the brim with personality. I don’t think a game has made me laugh as hard as I have when playing Borderlands. From Scooter telling you about his momma’s broken “girl parts” to the neurotic breakdown of Tannis, it’s all comedic gold. By far though, the NPC(s) that stands out the most is CL4P-TP, Clap Trap. He’s a quirky little robot that directs you throughout much of the game and provides endless amounts of entertainment.

One great perk to Borderlands is the split screen support. While it is a fantastic game played solo, you’ll get so much more when played with a friend. However, the splitscreen seems to have been applied poorly. The menus are cut off and you must use the right stick to move it around to see the entirety of it. The same is true of scopes, with the top and bottom portions cut off. While it can be played online with three others, you cannot play splitscreen online. I have no idea why it wasn’t implemented, but it was a terrible decision. Player beware though, when playing with other online, it is quite common for quests to become bugged, making them impossible to turn in. My siren seems to have taken the brunt of this as I cannot complete the epilogue on my second playthrough. I have played with other who have this same problem and there has yet to be an explanation for it.

Apart from the lackluster ending, bugged quests, and lack of online splitscreen, Borderlands is still a terrific game. It is aggressively addicting, so much that I have delayed Final Fantasy XIII. Nothing has ever done that. So kudos to Gearbox for making such an incredible game that is a blast to play.
Game Reviews

Dustin said…
You summed up how I feel exactly. The quests can be buggy, and the lack of online splitscreen, as well as splitscreen system link, is a real bummer. Those complaints aside, what an amazing game. Gearbox knew exactly what players would want out of an FPS RPG. They put the shooting first, made it extremely satisfying, and added an awesome loot system on top of it.

I have been playing through the game with a friend. We played for 11 hours yesterday and never got bored. I'm at the very end of the game, we should be finishing it tonight, and I'm still amazed at how good it is. The humor is fantastic, the art style is refreshing and colorful, the sound design is amazing, and the shooting feels perfect. Nearly every element of the game feels delicately crafted to create an amazing experience.

Videos don't do the game justice. I delayed buying it because I thought the shooting would be like Fallout 3's (that is to say, not very good). But man, I was completely wrong. I'm very excited to see where Gearbox takes the franchise in the future, and I will be at the midnight launch for the inevitable release of Borderlands 2.
April 26, 2010 at 3:49 PM