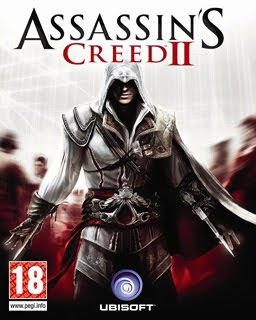 Ever since seeing the original Assassin’s Creed, I knew it was a game I needed. Problem was, by the time I had a current gen system, the sequel was announced. So I did what I normally do in these situations and waited. Before long, I picked up my copy of AC2 and the wait was worth it.

The story picks up immediately after the first game and follows Desmond as he breaks out of the lab he’s been held prisoner in. He is brought into a small fold of assassin’s who put him in the Animus 2.0 to train him as an assassin and find the other pieces of eden. The majority of the game revolves around the new assassin, Ezio Auditore de Firenze, an Italian who lived during the Renaissance in the late 15th century. Ezio’s family is framed and when his father and two brothers are hung, he must take his mother and sister into hiding. Along the way, he is trained as an assassin and receives help from notable historic figures, such as Leonardo da Vinci. Ezio’s entire driving force is unraveling the conspiracy that lead to his family’s murder and exacting revenge on those responsible.

Game play flows smooth and easily. Controlling Ezio as he runs up walls and across rooftops is a simple matter. The only issue I faced as I tried to line up particularly difficult jumps was Ezio leaping into nothingness if my button presses weren’t precise. Beyond that, an hour into the game and the controls will feel completely natural and you’ll be performing incredible acrobatic feats with ease.

Combat tends to come to a grinding halt when compared to free running. More often than not, skirmishes end up being a circle of enemies surrounding you while you wait to perform a counter attack that kills them in one fluid motion. Wash, rinse, and repeat for the remaining enemies. Ezio comes equipped with a sword, throwing daggers, wrist mounted blades, poison for wrist blades, and a pistol built into his left gauntlet. Ezio can also disarm opponents and use their own weapon against them. If timed properly, this can also be chained into a quick kill.

In addition to the weapons, Ezio may upgrade his armor as you progress through the game. Armor adds more life and makes encounters at the end of the game much easier. A special set of armor and weapon are provided to Ezio if he can solve the puzzles of six hidden tombs spread throughout the game.

One aspect of the game was unexpected and provided some of the most enjoyment for me as I played. Relatively early on, Ezio gains access to a villa and a small town. By purchasing paintings, weapons, and armor, Ezio can upgrade the town. He can further upgrade it by remodeling buildings or building entirely new businesses. The more that is invested in the town, the more income can be collected from your personal coffers. It was incredible break from running through the streets and hunting down your targets.

As you progress through the missions, you’ll travel from notable locations such as Florence and Venice to Rome and San Gimignano. Missions range from escorting someone to chasing down pick pockets and outright assassination. As Ezio’s notoriety rises, he can lose guards by disappearing into crowds or paying prostitutes to distract them. He must remove notoriety by tearing down wanted posters or bribing town criers. Each location is unique and gorgeous in its own right.

One issue I ran into involved the puzzles left by Subject 16. Some of the clues are so small and obscure that it was virtually impossible for me to identify on a standard definition TV. Thankfully, finding and solving all of the puzzles is not essential to completing the game.

AC2 is a fantastic game worth its weight in gold. The replay value is incredibly high as there are numerous collectibles to be had. There’s also the pure enjoyment that comes from free running across the cities. As an added bonus, you are able to link the game up with an Ubisoft account and purchase extra goodies and you unlock achievements. These range from extra daggers to Altair’s outfit. This is a must have for any gamer.
Game Reviews