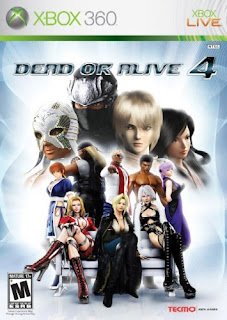 Being a late bloomer for the Xbox 360, there are plenty of games I want, but have to track down now. Dead or Alive 4, like Bullet Witch, is one of these games. I had played the second entry in the series and with the birth of this new generation, I wanted a new, updated game. Five years later, I have it. I almost wish I never bothered.

The first impression many had with this game was the amazing visuals. Five years later, the backgrounds are still lush and detailed, but the character models fall short. Characters are all doe eyed plastic vixens with breasts that heave and bounce with every movement. Their hair is wonderfully detailed and animated, but the models lack substance as the hair falls through the shoulders of a character as they move. With as much time obviously spent in jiggle physics, one would think they’d give the characters a greater level of detail and realism.

Realism is in direct opposition of all things Dead or Alive. The story is vague at best. Even after playing through with all 22 characters, I had very little idea as to what was going on. Every ending had absolutely nothing to do with their respective characters. Some characters end the game making a salad or having a dream that they’re a mermaid trapped in a net. It all makes zero sense.

For a fighting game with only two attack buttons, one throw and one block, there is a surprising amount of depth. There are a wide variety of moves and combos to learn in addition to the numerous fighting styles represented by the characters.

But no matter how good you think you’ve become, the AI will punish and belittle you with impossible moves and outright cheating. Every move you use can and will be countered. Don’t be surprised to see your punch turned against you with a leg counter. In addition to the counters, expect 10-11 hit combos. Single player mode is an exercise in frustration. Most of my wins consisted of pure luck. This is one of the very few games that has made me want to throw my controller in a fit of rage.

The copy I purchased was used for $14. There was no way in hell I was going to pay the $50 some sites offered for a sealed copy. As such, the disc was scratched and rendered online play useless.

In the end, I could only recommend this game to diehard fans of the series. Odds are, this will be my last outing in this series. The AI is a cheating bastard and there is no story holding this mess together. I think this series is leaning more towards the dead side.
Game Reviews