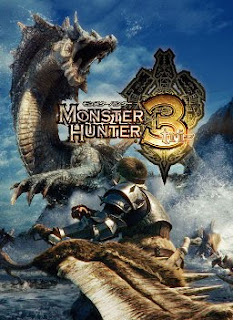 A series that has long needed to come to consoles finally does. Only, to the wrong console. Supposedly, it was supposed to be a PS3 title, but development costs got out of hand, programmers probably got lazy and it went to the Wii. Seriously, Capcom? Development costs are keeping YOU down, one of the biggest game publishers? Too much money go into the rehashing of Street Fighter 4 into Super Street Fighter 4? Despite being on a lack luster console, Monster Hunter 3 deserves a fair shake.

The Monster Hunter series as a whole hasn’t changed a whole lot. Much like Mario, Zelda, and Metroid, Monster Hunter puts you in the same situation with each outing. A village is plagued by monsters; they hire a hunter (you) to wipe them out. Simple as that. While I would like to see some innovation and originality, what can you expect? The game is called “Monster Hunter”. You hunt monsters.

The game can be played with either the Nun chuck scheme or Classic Controller. I recommend going with the classic controller, as swinging the stupid remote to unsheathe your sword gets old after the first time. You’ll get quests from the Guild Board or villagers themselves to hunt various monsters. Sometimes they’ll need to be killed or captured, or very rarely run off like the delinquents they are. After killing a monster, they may be harvested for items used in weapon/armor crafting. There is no leveling system. You live and die by what you can harvest from the monsters themselves and the environment around you. To help with this, there are feline companions who can tend to a garden for you, growing herbs and other goodies for hunting use. Quests are broken up into ranks and after completing so many, an urgent quest will appear, allowing you to increase your rank.

Visually, Monster Hunter is impressive as it can be on the Wii. It would have been epic on the PS3 or 360, but you can thank Capcom for being cheap. Still it doesn’t live up to the graphic standards set by games on the GameCube a generation ago (Resident Evil, Resident Evil 4, and Legend of Zelda: Twilight Princess). Granted the area is much larger, but I feel a distinct lack of effort on Capcom’s part. I say this, because both Resident Evil games are Capcom products as well. They are capable of quality. 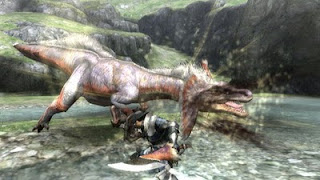 The soundtrack is full of Monster Hunter familiarity. A relaxing treat for the ears but beyond that, nothing to write home about. Most NPCs don’t have any vocal ability and your character is limited to a short range of grunts.

Monster Hunter brings about a revolution for the Wii in the abolishment of the nefarious friend code. Nintendo usual blindfold and gag routine flies out the window with a voice chat system in place. Online, you can team with four other hunters, annoying voices and all to take down tougher hunts for better rewards. Lag is minimal and I’m amazed at how long it has taken a developer to make a competent online game for the Wii. Also, there is an offline component where two players on the same console can work together to bring down monsters in an arena setting. Sadly it does not carry over to the main game.

Monster Hunter is a great series for those who want to experience a MMORPG without the online fees and better than average computer. But with that comes the grind for materials and better equipment found in MMOs. This is a game about patience. Of course, like any other game, this is made better if you have a group of friends to play with.

The Wii finally gets another quality game and hopefully other developers take notice of the way Capcom has crafted the online aspect. If you have the patience and want a piece of monster hunting glory, then by all means, have at it.
Game Reviews

ZeroAnd09 said…
Don't get me wrong, it's not that I hate the Street Fighter series. It just seems like missed potential removing Monster Hunter from the PS3. It could have been gorgeous without ridiculous load times. And Capcom citing development costs is like Bill Gates saying he didn't have enough money to make a better version of Windows. So I wonder if Capcom is just getting cheaper by rereleasing a Street Fighter with more characters like they did with the 8,000,000 versions of Street Fighter 2 and putting a game on a lower end system on the Wii.

So, I'm sorry for what looked like Street Fighter hate. My interest was actually peaked witht he addition of Cody and Ibuki.
May 14, 2010 at 8:26 AM