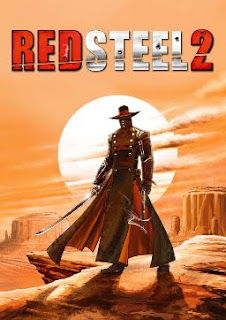 When I think of the Wii, I think of the controls first. Namely, how they are terrible. Even with the new Wii MotionPlus, I’m left flailing my arms like the special kid down the street. I’ve never felt any sense of grace or control during my frantic spats of arm swinging. So comes along Red Steel 2, a game that is supposed to capitalize on the “precision” of the $20 accessory. I don’t think I’ve laughed this hard in a long time.

The plot is simple enough. You’re the unnamed hero of the feudal west. Last of your clan and a city’s only hope, you must rid said city of a gang of dim-witted buffoons. The main villain is Shinjiro and he’s the one responsible for wiping out the rest of your clan. Cue the stereotypical revenge story and you’ve got Red Steel down.

Graphically, Red Steel 2 is one of the uglier games I’ve seen on the Wii. Everything is a shade of red or brown and looks very muddy. While I was playing, my girlfriend walked in and (seeing the game for the first time) remarked how hideous it was. That’s saying something if someone walking is forced to stop and comment on the embarrassing graphics. The character models are blocky and resemble the many square buildings littering the streets of this vapid world. 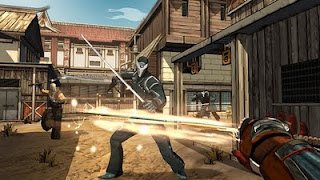 The audio is uninspired as well. From the background music to the voice acting, it’s as flat and bland as the graphics. Throw in the gimmicky Wiimote sound effects and you’re firing on all cylinders for why I loathe the Wii.

Gameplay is an exercise in futility. Red Steel 2 is a first person shooter with a far too touchy camera control. If you’re not careful with the Wiimote, you’ll spend most of your time like I did readjusting they way you’re facing. Combat consists of swinging the Wiimote (You know what, I’m sick of Nintendo’s dubbing of tech. Wii this and Wii that…it’s a controller.) err controller as hard and fast as possible to take out your enemies. No challenge whatsoever when the game refills your health after every encounter. Later in the game you’ll get a move that essentially breaks it. You won’t need another and what little challenge evaporates.

Upon completing a mission or purchasing the skill itself, you’ll be forced into a tutorial on how to use your new ability. Red Steel 2 will treat you like a simpleton as you’re forced to watch a crudely imported girl perform the action three to five times with her controller. Then, you get the joy of repeating it five times yourself. This plays out for each move, including the 15 minute tutorial where you learn to perform all the basic moves in the beginning. What makes it unbearable is the four minute video tutorial before you can play the game explaining how to connect and disconnect the Wii MotionPlus. I’m convinced Nintendo thinks we’re all morons who would impale ourselves with the control if they didn’t tell us how to use it.

Red Steel 2 is a classic example of the shovelware that plagues the Wii. Instead of trying to create something with substance, Ubisoft pulled out all the stops for the Wii gimmicks. From the laughable graphics to the poor “innovative” controls and terrible controller sound effects, it’s a joke and I’m not laughing. Feel free to avoid this one.
Game Reviews