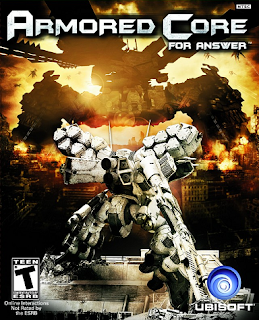 The Armored Core series has been around for a long time. Known for its customization and fast paced action, it is a series well loved by the mecha community. For better or worse, this entry adds little to the series but does not fail to entertain.
Missions are presented as briefings and do little to nothing to explain the story. Put bluntly, the surface of the world has become uninhabitable, forcing people to live on giant floating platforms in the sky. A handful of factions, including both militaries and private companies, vie for control of resources on the war torn planet. Working as a private contractor, you have a variety of missions open to you at any given time, including clan ranking battles that will unlock new parts upon winning.

Winning is easy only in thought. The AI in AC:FA is incredibly gifted with hitting you from across the map and chipping away your health. This is compounded in the later parts of the game where you must complete multiple objectives with entire units trying to gun you down. Simply put, this is not an easy game. My inadequacy was only furthered proven with the one on one ranking matches with signature mechs. Numerous strategies line the internet on how to topple these foes, but it all comes down to practice, practice, and some more practice.

Visually, FA is a treat. The mechs are wonderfully detailed and the landscapes provide a sense of desolation and destruction. Buildings and other structures realistically fall to pieces as they sustain damage. The lighting effects in particular are a joy to behold as beam rifles and particle effects light up the screen.

There is an online multiplayer service, but good luck finding a match. As of this writing, game servers are a ghost town and you’re better off sticking to the single player mode. What few matches I did play, consisted of everyone showing off their Gundam inspired suit before blowing me out of the sky.

In the end, FA is a good game, but only for the mech crazed. Personally, I would recommend another mech based game, Exteel. It’s a free to play MMO developed by the wonderful people at NC Soft. The servers are full and there’s plenty of customization to be had.
Game Reviews