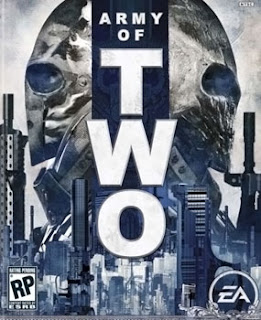 Army of Two was the first game we had purchased for our shiny new Xbox 360. I’m still convinced it’s one of the better games for the system, even better than the sequel. It brought about an innovation in cooperative shooters in the form of true teamwork being necessary to complete the game.
The story follows Rios and Salem as they graduate for being Army Rangers to working for the PMC (Private Military Corporation) SSC (Security and Strategy Corporation). Each mission takes part in a different part of the world as they track and eliminate terrorist threats. Throw in a double cross and a conspiracy to complete the generic but still enjoyable story. The real treat is in the character interaction between Salem and Rios. They act as a new age Abbott and Costello with a hilariously entertaining straight man in Rios.

Gameplay is based entirely around the idea of cooperation. To survive the overwhelming odds, players must use aggro. If you’ve ever played any kind of MMO, you should be familiar with this concept. One player acts as a meat shield and draws enemy fire while the other slips around unnoticed and eliminates said enemies. To make this easier, you’ll have access to a large arsenal of customizable weapons.

Each of the six levels is uniquely designed with no overlapping patterns. The graphics are superb with no slowdown or otherwise adverse effects.

Army of Two is a game clearly meant to be played with a friend. But if you’re socially awkward, there is a computer controlled partner to play with. He follows commands well enough, but Heaven help you if you get shot down. Your AI partner will come to your rescue, but will stand stock still and take round after round as he tries to revive you. This will usually net you a game over. To counteract this, be prepared to do most of the work yourself. It can be frustrating, but it’s much better than the Sheva problem that plagued Resident Evil 5.

Like I said before, I consider this one of the better games of this generation. From tight controls and plenty of replay value to a passable story and competent graphics, there is much to enjoy. If you have a friend or loved one you game with regularly, this is a must have title.
Game Reviews