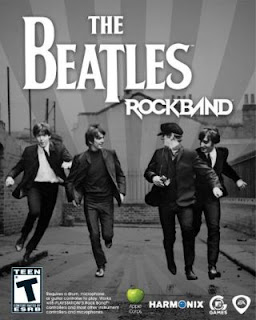 I’m not a fan of The Beatles, I’ll be the first to admit that. I was raised in an Elvis household. From my experience, you’re either a fan of one or the other, but never both. Needless to say, I wanted nothing to do with this game. Much to my chagrin, Kim comes from a Beatles household. How the hell did this game end up in my house?

Beatles takes the familiar Rock Band mechanics and adds some new elements. One of the more flaunted elements is the harmonies present in nearly every song. You and two friends can try to match pitch as you make everyone in the room writhe in agony and bleed from their ears. Also added is a timer when the game is paused. After unpausing, the timer counts down so you can easily slide back into the song hopefully without breaking your streak.

The game’s selection of music consists of many hits and some lesser known songs from their entire career. Each song has been hand crafted and customized, either recreating famous performances or introducing “dream sequences” for songs done during the later studio years. Unlike other Rock Band entries, the songs from Beatles cannot be incorporated into Rock Band 2.

While I’m still no fan of The Beatles, I can appreciate the influence they had on the world of music. The game was still enjoyable to play and even brought about a few innovations I would like to see included in future Rock Band games.
Game Reviews