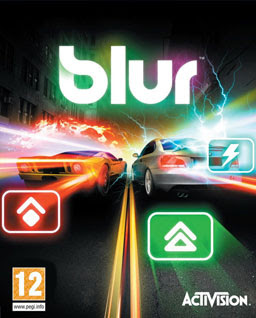 Coming off an immensely popular multiplayer demo, Blur has proven to be a racing force among numerous entries being released simultaneously released. While the most common description is being Mario Kart with real vehicles, Blur does not shy away and delivers and amazing racing experience.

Blur comes with two modes to focus on, career and multiplayer. Career is a single player battle against the computer with numerous boss racers marking your milestones. Players will need to meet certain requirements to earn a one-on-one race against each boss. Win and you get their car which carries over to multiplayer. During races, there are numerous objectives to be met, but only one (finishing in the top three) to move on. While racing, attacks on other vehicles and fancy driving, such as drifting, earn fans. Fans are Blur’s equivalent of experience points. Gain a certain amount and be rewarded with a level up. New levels unlock cars and perks to race with. In addition, there are fan markers placed on the track which begin a “fan run” where you must clear all the checkpoints to earn another light. Lights unlock more divisions to compete in against other bosses.

Unfortunately, all of your progress in single player is for naught in online racing. You must level up all over again to unlock cars and mods. In addition, multiplayer features perks that can be equipped, such as taking less damage and nitro boosts for each completed lap. There are slight variations on races to choose from such as racing without power ups to 20 player team racing. It’s fast and addicting with down time between races giving you enough time to pick your car, color, and mods.

Visually, Blur conveys an incredible sense of speed. Regardless of class or track, every race is exciting and requires a fair amount of concentration to keep up with all that is happening. Cars are beautifully detailed with fully rendered interiors and drivers that visibly shift gears. Damage adds a wonderful touch as each hit dislodges a bumper or sends your trunk bouncing up and down.

Acoustically, Blur is impressive. Especially with a surround sound system hooked up. The subwoofer rumbles with each hit and other cars transfer from speaker to speaker depending on their proximity to you. There is a sound track, but by default is turned off. I have yet to feel a need to turn it on or plug in my Zune. The sound of the cars shifting and engines revving to rocks pinging the undercarriage provide all the soundtrack needed.

This is the first racing game I’ve owned since Gran Turismo 3. Blur is a wonderful departure from the pain in the ass license tests and money hoarding to buy your dream car. Progression in Blur is wonderful with the leveling system with rewards streaming in at an enjoyable pace. There may not be the depth of tuning and customizing each car, but I feel it makes Blur that much easier to jump into.

Complaints? Take a guess. Another obvious title for it, but there’s that frustrating lack of online splitscreen. Though, there is the nice inclusion of four player splitscreen for offline racing. Thankfully, all cars and classes are unlocked at the beginning for maximum fun.

I’ve come to the conclusion that Blur is a must have for any gamer, regardless if you care for the racing genre or not. It’s fast and addictive. My only complaint, and this is a common one for the generation, is the lack of splitscreen online play. Beyond that, this is gaming nirvana.
Game Reviews