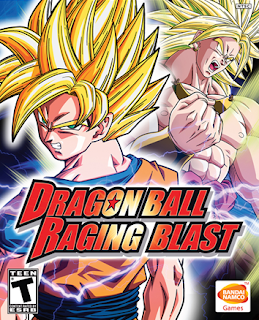 It has been seven years since I’ve played a Dragon Ball game. To be more precise, the only one I had played was the first Budokai released on the PS2. While I knew I was overdue to pick up a new one, I didn’t know why I should. There was a new Dragon Ball game being released every year. The decision was finally made for me when Ryan picked up Raging Blast and told me I needed it as well. After playing it, I tend to agree.

RB flaunts numerous modes and among them, a good portion of the story. From Raditz to Buu and even Broly, the entire Z series is represented. Sadly, most of the story is presented in lack luster cut scenes where a single shot of character A converses with a single shot of character B. Most of the details are lost and unless you’re an avid fan of the show, you’ll be left scratching your head as to what exactly is going on. The game encourages players to play all three difficulty modes to unlock all there is to be had, such as extra characters and costumes.

The controls are simplified to a respective button for physical attacks, energy blasts, blocks, throws and the right analog stick controlling finishing moves. While the controls are simple, the game is critical on timing. The window for blocking and throwing out a counter attack is tiny, a smaller margin than Dead or Alive 4. Compound that with a few unblockable attacks from characters like Broly, kid Gohan, and Goku and you’re likely to get frustrated very quickly. In fact, most online matches consist of players picking characters with such moves and hammering you ad nausea until they win. Though if you manage to get the upper hand, expect a rage quit so the loss won’t show up on their fighting record.

The graphics in RB are a dead ringer for the anime. The cell shading is among the best I’ve ever seen in a game and some attack sequences look like they were lifted directly from the show. Backgrounds are gorgeous and provide plenty of variety for your matches. I was surprised to be drawn to Namek. I hated the different shades of green in the anime, but now I can appreciate the beauty of the planet because of how gorgeous it is in this game. 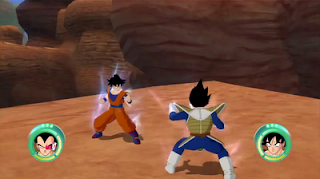 The only real depth to this game is in the character customization. You’ll be presented with a grid that must be filled with perks for your character. Only problem is, they’re all weird shapes and must be fit together like a jigsaw puzzle. These can affect anything from stun times to quicker Ki charges and more powerful attacks. Proper character builds are key to winning.

Beyond the incredibly small window for blocking and countering, my only real beef with this game is the camera. Normally it isn’t an issue, but if an opponent is directly above or beneath you, the camera pulls an odd angle and suddenly you can’t see anything. It is frustrating at best of times and can lead to many an unfair fight.

In the end, Raging Blast is a fantastic game for fans of the series. Even non fans can find themselves sucked in and buying the entire series to fill in the gaps left by the game. It’s easy enough to jump into with plenty of depth in the character editor to fuel many different strategies. The roster of fighters is impressive with all the major players present, including the fusion forms. So if you’re like me and have been out of the loop for the better part of a decade, this is an excellent point to jump back in.
Game Reviews