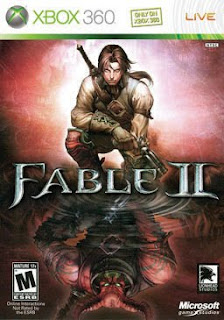 I prefer my games to be on an epic scale when played. I want to be overwhelmed, blown away, and locked in a constant state of awe. Fable II has been one of the few games to bring me this feeling. From the quiet beauty of the world surrounding the character to the emotional surges felt for the NPCs you meet, Fable defines what gaming should be.

Much like any great story, your character starts from humble beginnings. An orphan on the streets of Bowerstone, your character does anything to scrape out a living with their sister, Rose. A meeting with a cryptic gypsy leads to a music box and a trip to the local castle and its lord. Terrible things happen in your character’s youth and set the stage for an epic tale of revenge.

The story is rather straightforward with the trappings of the original Fable still adorned. If played straight through with no side quests taken up, Fable II ends up being a relatively short game. You start as a child, take on a quest for revenge, compete in a tournament, spend time in a prison, and make it back in time to stop the bad guy from destroying the world. It’s nothing original, but Fable II tells it in such a breathtaking fashion that it’s hard not to be swept away.

Much like the original, you are free to develop your hero as you see fit. This time around, the hero can be either male or female. You gain experience orbs from defeated enemies and the orbs reflect the way you dispatched them. Use a sword or other melee weapon and you’ll net red orbs for investment in strength skills. Use a ranged weapon and you’ll come up with yellow orbs for skill, such as increased speed and accuracy. Magic use gains blue orbs for a wider array of spells and increased power. Your character physically changes depending on how you spend skill points as well, becoming more muscular for strength, taller for skill, and gaining more glowing blue mana lines over their body if they’re a proficient magic user.

Choice has always been the focal point in the Fable series. Your choices have a more widespread and visible effect this time around. Even choices made early on in the game will have a dramatic effect on the world you later experience. Much like the original, these choices alter your character’s appearance. Do good deeds and your hair takes on a lighter tone and your skin a golden hue. Do evil and your hair thins and turns black while your skin pales and appears to rot. Add to this, a purity scale. Pure players gain a halo while corrupt players develop horns over time.

Unlike the previous entry, players do not earn cold hard cash by completing quests or exploiting merchants with supply and demand. Fable II has an economy ripe for plunder, provided you start early. Nearly every piece of property in the game can be purchased, and depending on the state of the property itself and the world around it, you’ll gain a tidy sum of cash for rent every five minutes. This time includes time when you’re not playing. It makes it easy to grind for cash when the game does it when not played. Because of this, creating multiple characters has never been easier. Well, that and the addition of multiplayer.

Fable II can be played co-op with a friend over Xbox Live or on the very same couch. To give your new character a vast fortune, simply load your new character into your existing character’s game. Set the scales so that they receive all the money from rent. If you haven’t played for days at a time, they’ll receive that initial lump sum and be set for the rest of their game. The only drawback to playing with another player is that whoever is playing as the henchmen cannot complete quests and must pick a generic premade character while in the host’s game.

Co-op aside, you’ll spend 95% of the game playing with a partner. Early on, your character rescues an abused dog and gains a lifetime companion. Your furry partner can assist you in a fight and help you find buried treasure across the broad lands of Albion. Be this money, weapons, or condoms, each has its purpose. I am hard pressed to find a more valuable partner AI in any game. I truly believe Lionhead perfected it with the dog in this game. Much like your character, the dog’s appearance changes depending on the choices you make. Do good deeds and your dog has a healthy white coat. Do evil and your doggy turns black. Later DLC, “See the future”, lets players choose the breed of their dog. A simple potion can turn your faithful hound into a Dalmatian, Bloodhound, or Husky.

Graphically, Fable II is stunning. From the vast fields of flowers to the darkest caves, it is candy for the eyes. The lighting is done to fantastic effect and each setting blew me away. The only flaw is that there are only a handful of character models. So in larger towns, you’ll find many of the same NPCs milling about.

The soundtrack was composed by the remarkable Danny Elfman and Russell Shaw. Nearly every piece gives me goosebumps as I play as they produce such a sense of awe. The music fits wonderfully with its respective setting and I never found myself wanting.

Fable II sets a benchmark in gaming that is hard to meet. It has a simple story, but one that is well told. There is an incredible amount to do beyond the main story and you’ll find yourself spending countless hours enjoying this masterpiece.
Game Reviews