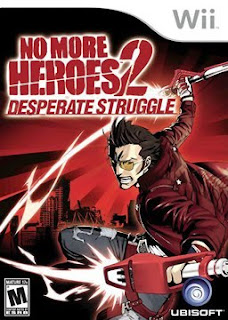 If you’re a long time reader, you know I’m not a fan of the Wii. So it’s a rare occasion when I sit down with the machine and even rarer when I enjoy my time spent with it. No More Heroes was a title that held some appeal, but not enough to make me play it. When a sequel came out, I took notice. Very rarely do games on the Wii see a sequel. Much like a handful of others, No More Heroes 2 turned out to be a diamond in the rough.

The game picks up three years after the first with Travis Touchdown locked into a duel with the younger brother of an opponent he had slain in the last tournament. After defeating him, he is unwittingly thrown into a new assassin’s competition, where he must battle his way back to the top.


The controls for NMH2 are remarkably tight for a game on the Wii. The only motion controls are used for finishing moves and are usually simple one motion cuts. The only complaint in this area involves the camera and lack of control. There is a button to lock onto opponents that serves as the only way to right the camera behind Travis.
Throughout the game, you choose what to do through a hub. From buying clothes and training Travis to taking on side jobs and actual missions, it’s laid out in a well designed menu. Unfortunately, the game runs a pattern that can’t be escaped until later in the game. It involves a few steps:
It’s tedious, but makes the game easy to play in bite sized chunks.


Visually, NMH2 is a dark and ugly game. There is no in-game option to adjust the brightness and most of the levels are very poorly lit. The game uses a half assed cel-shaded approach that looks dismal on the Wii. Enemy variety is also poor, as you’ll find yourself fighting the same 3-4 variations of the same enemies. Level design is sparse as well, with flat surfaces and no detail to speak of.
Despite these flaws, NMH2 is full of character and kept me addicted for a few weeks. There are numerous tasks to complete that ratchet up the replay value. It’s easy to tell that each boss was lovingly created and because of this, each and every one is memorable.
I greatly enjoyed my time with this game, but I can only see the potential for what this series could be. Designed on the PS3 or 360, this would make an already great game fantastic. Travis and crew deserve an HD makeover and the processing power would do wonders for the sparse levels. Of course I would want to see more of Jeane and Dr. Naomi. Naomi’s character felt under utilized as she only provides you with two weapons and that’s it. Why not add an upgrade system or some actual customization for the beam sabers? There is a remake of the first game for the PS3 and 360 already out in Japan, but a localization seems iffy at this point. Here’s hoping. 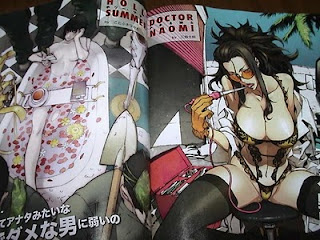