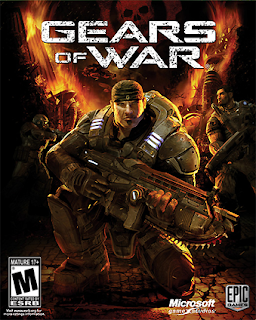 Epic games have been in the business of revolutionizing the gaming industry. They started with Quake and continued with Gears of War. It was released in November 2006.


Gears of War follows the members of Delta Squad on the planet Sera. Players assume the role of Marcus Fenix as he fights the subterranean race of Locust Horde. The Locust are hell bent on wiping out the human population and it’s up to Delta to find a way to map their massive subterranean tunnels and deploy the Light Mass bomb and wipe them out.

Where Gears is truly revolutionary is the gameplay. It is played from the third person perspective. It uses a cover system that has since been mimicked in nearly every shooter made since. The “A” button controls everything from sprinting to enter cover and taking evasive maneuvers. Popping out of cover is as simple as holding the left trigger to take aim and the seemingly never ending horde of enemies.

To make things easier, players have access to an impressive lineup of weapons. They run the gambit of handguns to shotguns and crossbows that fire explosive arrows. The fallback, good for any situation weapon of choice is the Lancer. It’s your standard machine gun with a twist. It has a chainsaw attached. This makes for an excellent way to dispatch of foes in a very personal manner.

There are numerous multiplayer modes to play in addition to the story. Players are grouped into teams of four, one side playing the members of Delta and the other playing as the Locust Horde. Matches are split into standard deathmatch and a capture the flag mode.

Graphically, Gears set a standard in 2006. The game has aged well considering this. Despite this, Gears is a dark and gritty game. The graphics fit the theme of the game very well as it is a story of survival in a harsh and terrifying world filled with monsters.

Gears is an enjoyable game but is not without flaws. Often when using the Lancer, I would perform the animation and see an enemy who was in front of me be teleported five feet away. The game is also plagued with lack luster AI. When played solo, the AI takes control of your partner Dom. Dom has an annoying habit of soaking up enemy rounds and refusing to take cover. Then he has a tendency to die. This wouldn’t be a problem if it didn’t give a game over and send you back to the past checkout. The final boss is especially tough because of Dom’s inability to perform. Thankfully, there is the option to play with a partner through splitscreen or Xbox Live.

Gears or War is a turning point for games. Not so much for the story as the way the game is played. What flaws existed have since been fixed and the game improved in the sequel. Still, no one can deny the impact this game has had on many games released since.
Game Reviews