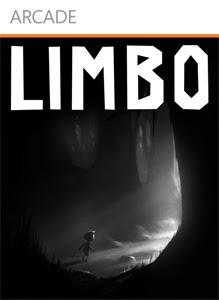 Limbo is the first entry in Xbox Live's Summer of Arcade.  It's a 2D platformer/ puzzle game with a simple design and premise.  Don't be deceived though, Limbo will test your abilities to the fullest.

Limbo follows a boy in his adventure to find someone.  There's no written story, no cinematic or interactions that reveal anything about our protagonist's motivation.  Limbo is a monochromatic world where you must continually move forward.

The design is simple with the boy and most objects being blacked out.  The background is filled with shadows and brilliant points of light.  It is enchanting and haunting at the same time.  The only sounds heard are the boy's foot steps and ambient noises based on his environment.

The game starts off as a platformer and then ramps up into a puzzle game.  The transition comes about an hour into the game.  The difficulty of the puzzles increases exponentially.  This can lead to some incredibly frustrating moments.  In contrast, once you figure out the solution, it's silly how obvious it was.

I played through it the first time with three over people over Xbox Live.  We made the game easier than it probably would have been by sharing tips and tricks as we progressed.  Still, Limbo was a fantastic little journey that was different from most games I've played.  It's easily one of the best examples of games as art because it leaves the player to interpret everything, from motivation to setting.

Limbo is available on Xbox Live Arcade for 1200 Microsoft Points ($15).  It lasts three to five hours on the first play through and is much shorter once you know the puzzles.  It's well worth it if you're looking for something different to play.
Game Reviews