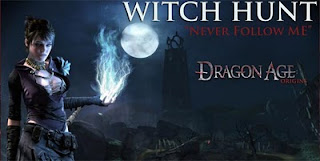 Me being the sucker I am for what I consider the greatest RPG of the past decade, was estatic to hear that I could mend ties with the wayward love of my first character in Dragon Age: Origins.  After playing it, I want my admission fee back.

Witch Hunt takes place after the main campaign and promises to tie up loose ends with the most enigmatic character in the game.  This is a lie.  Witch Hunt takes two hours at the absolute most to complete and I'm fairly sure my unborn child could beat it, it's so easy.  Quite literally, I didn't have to set up any tactics.  I just let the party do what they wanted and breezed through the DLC on normal.

But it's not about the length they say.  That's a lie as well.  The focus on this expansion is Morrigan and finding out what she's up to.  Long story short: you meet up at the very end and talk for five minutes.  Nothing is resolved, and you're left with a $7 teaser for the next game.

This is by far the worst piece of DLC I've ever played.  Had it been put in with the rest of the main campaign, it would have left a huge imapct.  As it stands, I'm a little ticked off.  Buyer beware with this one.
Game Reviews