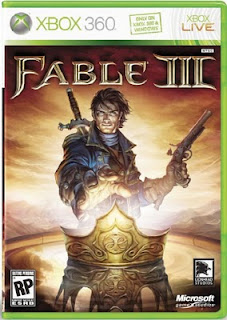 I have been a slave to the Fable series. From those first few fateful steps into the world of Albion to the resurrection of my dog, I haven’t been able to get enough. Lionhead sank its claws into me with this series. I had been watching the third installment for a long time. Did Lionhead manage to sink their claws in further, or is this my chance at escape?

Fable 3 doesn’t start like the previous entries. In fact, there’s not much that it does follow. Fable does away with many old practices and introduces many new features. Unfortunately, not all of them panned out the way they were intended. For example, Fable 3 does away with the traditional menu and brings out “The Sanctuary”. When you press start, you are transported to a room where your butler, voiced by John Cleese awaits. From here, you can choose where to go and manage your property from a map in the center of the room. Or you can use any of the other rooms to pick an outfit, choose weapons, change game settings, or manage your fortune. While a novel idea, it quickly wears thin hearing John say you have new items that aren’t really there or repairing all of your property individually. Quite literally, it takes at least fifteen minutes to go from house to house and repair them. Why a “repair all” feature wasn’t included is beyond me.

Traditional leveling up is gone as well. Instead, you are on a forced march down the “Road to Rule”. What doesn’t make sense is that you have to buy abilities that should already be available like buying property or getting married.

Coming from Fable 2, Fable 3 just doesn’t feel finished. They took what worked and got rid of it. Instead of picking the way you interact with NPCs, you’re forced to use whatever expression the game has picked out. In my case, I was forced to dance with everyone I met. Man or woman, it didn’t matter. I did the same expression over and over and over.

Despite the flaws and obvious omissions, I enjoyed Fable 3. That was until I hit the end of the game. I had sacrificed everything for my kingdom. I gave them freedoms they had never experienced. I turned the homeless shelter/orphanage into something that rivaled my castle. I even removed a drinking limit. How did my subjects repay me? They threw up on my boots. I can’t take five steps in any town without seeing the stumbling drunk masses vomiting in the streets. Even the caretakers in the orphanage were vomiting in the facility I rebuilt. After doing everything to the best of my abilities, I finally lost it. I went on a murderous rampage that ended with the death of everyone in Bowerstone industrial.

It makes for a great metaphor. The entire game is enjoyable, but it just kind of throws up on you in the end. The game is buggy in many spots, from iffy controls to NPCs floating in the air. I felt like Fable 2 brought much more to the table. The graphics haven’t improved and the musical score has lost that haunting undertone. Fable 3 just feels like a mess when compared to its predecessor.

I enjoyed Fable 3, but it could have been so much better. There was so much potential that went to waste because Lionhead thought we wanted to go on countless hand holding escort quests. Had they taken the time, fixed the bugs and lackluster menu, this would have been a triple A game. As it stands, even the truly devoted may feel like they were robbed by the meager offerings of this outing.
Game Reviews