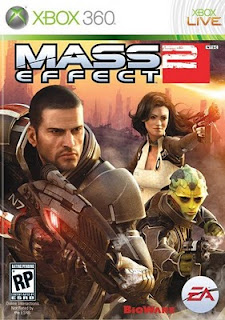 My impressions of the first Mass Effect were mixed. On one hand, I really hated the Mako driving sections. On the other hand, the game kicked all kinds of ass when I was focused on the story. I was playing when the second had come out, so I was torn on whether or not I should continue Commander Shepard’s journey. Thanks to the phenomenal ending sequence in Mass Effect, I was sold and out buying Mass Effect 2 days after the last credit rolled.

BioWare took what worked in the first game and made it better. Then they went the extra mile and took out everything that made the game unbearable and banished it to the lowest circle of Hell. Gone is the tedious leveling system and the absolutely terrible Mako exploration. In place, there is a sleek and focused leveling system. A planet scanner replaces planet exploration and makes gathering resources a little more exciting. Gone are the vast amounts of armor and weapons. This outing features upgradable weapons and armor that you can customize to your personal style.

The story takes everything that I loved in the first game and builds upon it. The story is longer and is fleshed out, answering many questions while asking a few new ones of its own. A majority of the side quests actually play into the larger picture with you exploring your crew’s personal quests. What doesn’t fit into either of those categories are bite sized missions that are perfect for quick gaming sessions.

The worlds, or worlds, or Mass Effect 2 sucked me in with the increase in detail and overall design. From the sprawling city scapes to the incredible variety of terrain on the planets you’ll explore, there is no way to resist the immersion that happens while playing. The sound track plays in perfect harmony with the gameplay. So much so, that I needed very little persuasion to buy the sound track. I haven’t bought a game sound track since Final Fantasy VIII.

Combat takes a huge leap forward, with tighter controls and an easier control scheme for team mates. Shepard doesn’t handle like a drunk anymore and my partners carry more of the load than the first crew. Mixing and matching powers is made easier than ever with the new leveling system. I was impressed with some of the combos I was able to pull off.

While I loved almost every member of my crew in the first game, Mass Effect 2 turned them into one of my all time favorite groups. With fleshed out back stories and the always superb voice acting, I couldn’t help falling in love all over again. Even characters that I wasn’t sure about at first quickly became regulars.

I can’t think of one person I wouldn’t recommend this game to. It is the pinnacle in current gen gaming and will be a title that I play over and over. At least until Mass Effect 3 comes out.
Game Reviews