Verdict:  Lake Geneva and I do not have a good history when it comes to delicious burgers.  For whatever inexplicable reason, every burger I order comes soaked in grease and lacking in flavor.  Sprecher's had recently acquired a favored dining spot of mine, Houlihan's.  I was nervous, as anyone would be when one of their favorite eating spots comes under new management.  Being a firm believer that a burger defines the restaurant, I decided to go ahead with the Breakfast Burger.  Ever since trying Red Robin's Royal, I have searched long and far for another that can use a fried egg to such effect.

When I received my burger, it showed all the classic symptoms of being a "Lake Geneva burger".  It was coated in a fine layer of grease and adorned with fatty bacon that literally had plastic clinging to it.  The egg looked well enough until I pick up the burger and saw the yolk pop and drain along with the grease and cheese onto my plate.  The meat was charred and had no flavor on the inside.  I took three bland bites and had to put it into the puddle that had formed on my plate.

Why no establishment in Lake Geneva can get a burger right is beyond me.  But as it stands, I've lost all faith in that tourist town.

On the side:  A salty hash brown circle resting on a nest of grease. 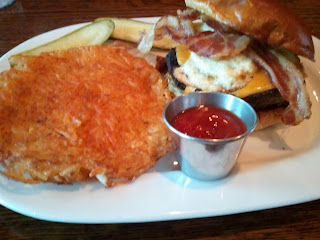