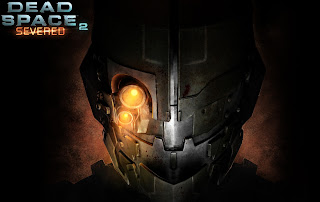 Severed is the first piece of DLC to hit for Dead Space 2.  It's refreshing to see support come in the form of something other than costume and weapon packs.  Severed acts as a stand alone campaign.

Severed picks up after the events of Dead Space: Extraction.  Gabe and Lexine are now married and living on the Sprawl.  Life seems to be perfect for the two until shit hits the fan, as it tends to do in the Dead Space universe.  At the start, we find Gabe working security and down in the mines.  The entire objective over the two chapter story is to reunite Gabe and Lexine. There are a few major twists and turns and at the end, I found myself caring about these characters just as much as I did for Isaac.  Not to hint toward spoilers, but the ending left me wanting more in a very good way.

Severed plays out much like the second half of Dead Space, being very action packed in its content.  There are a few hair raising moments, but not as many as are typical with other Dead Space entries.  This is understandable as an entire story must be told in the span of an hour.  Gabe has access to all the weapons of Isaac, and can even upgrade his suit and said weapons.  There is no real impact to not upgrading and I'm not entirely sure why the power nodes were included since there is no option to carry over items into a new game.  This is bizarre because the save file is numbered much like the regular Dead Space save file.

In the end, Severed is an amazing piece of DLC.  It is solid in the story telling, pacing, and game play.  It even brings the Twitchers from the first game back in the same way they used to tear me apart.  All for the low low price of 560 Microsoft Points or $7 on PSN.    While it may be lost on those that didn't play Dead Space: Extraction, it is an astounding adventure and well worth the investment.
Game Reviews