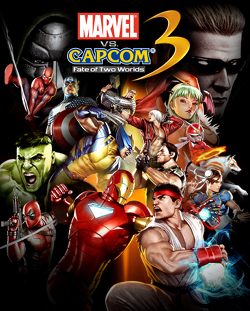 Waiting 12 years for a sequel is a hard thing.  Ask any fan of Duke Nukem.  Unlike Duke Nukem, the Marvel vs Capcom series has aged relatively well.  It's still a tournament staple and was released last year on Xbox Live and Playstation Network.  The big question many asked when MvC3 was announced was, "Do we need another MvC?"  My first question was, "When can I buy it?"

With the smash hit that Street Fighter IV became, it seemed like an obvious move for the Capcom giant to breath new life into another series (When can I expect a new Darkstalkers?).  Applying the 2D 3D design with the extravagant colors and hint of cel-shading is the perfect visual for a game that has super-powered individuals beating each other senseless.  Everything is fast and fluid with plenty of seizure inducing flashes from the character specials and attacks.

Much like the past two entries, each character has three variants for special attacks and tag in attacks.  You build a team of three characters and win when the other team is wiped out.  Specials are built up through inflicting and receiving damage, up to five bars total.  It essentially breaks down into one bar per character, with three or more bars triggering all three of your characters to unleash their specials at once for screen filling destruction.  There's also a mode that allows you to power a character up for a short time, unleashing massive damage and recovering health at an incredible rate.  This can be triggered once a match and can drastically change the outcome.  Each character is incredibly unique with no two resembling one another (except Akuma and Ryu).  This is an incredible breath of fresh air when compared to the last entry in the series where many characters were essentially reskins.  The character roster has been drastically cut, removing many of my favorites.  But the move sets of this roster is so varied, that there isn't much love lost.

The soundtrack is catchy as ever, with the menus making me nod my head and tap my foot.  Each character has a theme, and it plays when they're brought into the action.  The voice work is top notch, with both an English and Japanese track that can be customized to individual characters.  Attacks feel right when paired with the sound effects and the overall audio aspect is quite a ride.

The game has the standard variety of modes.  Arcade has you play through numerous rounds before taking on the final boss *spoiler* Galactus *end spoiler*.  Each character has a unique ending, and the only way to view it is to make sure that character is the one who lands the final KO.  There's a training mode that allows you to practice against a dummy AI and perfect your roster.  Mission mode is challenge based gameplay with 10 challenges per character, designed to teach players the ins and outs of each character.  A shadow mode is also in place, letting you fight AI versions of tournament champs and the development staff.  I'm terrible enough at this game without the best in the world handing my head to me.  Multiplayer has the standard versus affair and an online mode.  In addition to this, each character is issued a player card that tracks numerous statistics including: win/loss, play style, preset character rosters, and current rank.  Everything is in place to make this a great online game, but the matchmaking is so broken, it renders the game unplayable online.  When connecting to a match, 90% of the connections fail, returning you to the main menu.  Also, if you  do happen to find a lobby, you must queue up in a line of up to eight people while you watch the two current player's life bars fall and their cards bounce.  Why can't we watch them fight?  This was something that was in place in the last game!  It's absurd that such an obvious feature is missing.  I love the game, but it ends up collecting more dust than normal due to the faulty online components.

Beyond the excellent core mechanics to keep players punishing their thumbs, there is a large amount to collect in terms of artwork, model viewers, voice samples, etc. to keep you playing for some time.  It's miles ahead of MvC2, but still needs some tweaking to really shine.  Capcom being Capcom has already released two characters for the price of $5 or 400MSP each.  (Jill Valentine and Shuma-Gorath).  Without any doubt, they will release more characters and costume packs to keep fan interest.

This isn't a game for the casual player.  There are some very involved mechanics in place, and there is a steep learning curve.  But if you're a fan of either franchise, it's definitely worth a look.  Especially if you like over the top action in your fighting games.
Game Reviews