App of the Week: Geo Defense

July 18, 2011
Name: Geo Defense
Cost: $2.99 (Zune Marketplace)
Description:  Something exciting and new in the Tower Defense genre!  The geometric vector creeps are fast and intense.  With 30 different maps, each its own puzzle, you'll have to work fast to keep up. 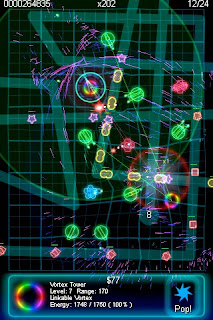 I'm not one for tower defense or strategy games in general.  However, the design of Geo Defense screamed for me to give it a whirl.  Thanks to all Xbox Lives titles on Windows Phone 7 including a demo, I was able to  indulge with zero cost to me.  What I didn't anticipate was being three levels in and wanting this game as much as I did.

Each level is full of fun, fast, frantic game play as you build the best defense possible to stop the "creeps" from hitting their final destination and ending the game.  You do this by building turrets along the path.  There are a multitude of turrets to choose from with each offering unique attacks.  In addition, each turret can be upgraded several times, increasing the damage and rate of fire.  As the waves progress, enemies grow in number and speed.  It's a quick game that forces you to strategically place the turrets and upgrade them to form the best possible defense. 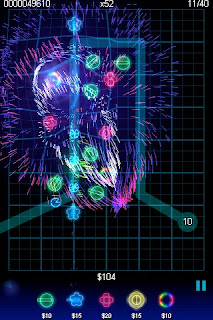 The design is sleek, the visuals entrancing, and the game play addictive.  It's everything you could want and more from a phone game.  It's so good that I might have to re-evaluate my stance on the tower defense genre.
App of the Week