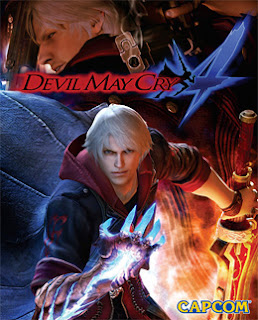 Devil May Cry is a series whose entire story will never be told.  There are four games in the series.  The order of the games in the series is a bit screwed up though.  To play the story through start to what is available, you would have to play DMC 3 then DMC 1 then DMC 4 then DMC 2.  Adding to that is the series reboot that is due out sometime next year.  My theory for the series never being finished is that DMC 2 was a flop in both reviewer and fan eyes.  That's a shame as it was my favorite game in the series.  You saw a more mature Dante with a somber story and fantastic game play.  The game (and series) ends with Dante riding a motorcycle into Hell and Lucia waiting for him to return.  What ever happened to Dante?  The world may never know.

DMC 4 follows a new protagonist, Nero, as he quests to unravel the secrets of his order and save his one true love, Kyrie.  It all begins with a concert that ends with Dante shooting the leader of Nero's order in the face.  Then it involves Nero's demon arm and Dante's dead twin, Vergil and his sword.  With all of this going for it, this is surely to be an involved game with well developed characters whose plight you can feel.  Not so much.  Nero spends most of his time screaming for Kyrie.  Kyrie also mysteriously turns into a mute after belting out the opening song.  She stares at Nero like an imbecile for 90% of the game.  When there's no meaningful character interaction, I can't care for the characters or the world they inhabit.  I finally started caring once I had the chance to play as Dante, but it's just a short trek covering all of the areas and bosses that Nero had just been through.

DMC 4 is a game that is artificially padded.  You must play through the entire game twice.  First as Nero, then as Dante.  There's only a handful of areas to play through and each offers plenty of variety when compared to the others.  There's the vast gloomy castle that must come with every DMC, the standard snow level, and even a sunlit jungle that feels nothing like DMC.  There are six bosses and by the end of the game, you'll have fought each of them at least twice.  It makes sense to backtrack in the game, but the blatant repeat of the levels screamed of laziness to me.

The combat is as fresh and fluid as the past two entries in the series.  Nero provides a new spin on things and is enjoyable to play, but his Devil Arm is the only action you'll be using for 90% of your time with him.  To build up any real ranking, it is necessary to spam the button.  The real treat comes when Dante becomes available for play.  He retains his previous styles from the last game, but can now change them on the fly.  This makes getting in the mandatory fights something to look forward to.  I was a huge fan of upgrading the Trickster ability and teleporting all over the place.  Only negative point is that Dante can't run along walls this time around.  DMC 2 set the standard: Dante can run along walls.

Speaking of negative points, there is one fun sucking black hole of an event that takes place twice in Nero's journey.  There's a board game that you're forced to compete in if you want to advance.  There are numerous spots on the board and a giant die that must be rolled.  Some spots spawn enemies, some drop orbs, some teleport you to the end, and others doe nothing.  The frustrating element is that you can't roll over and reach the exit.  You must roll exactly to proceed or prepare to be stuck in a loop.  Rolls are completely random and forcing a player to waste time on a segment because of this is ridiculous.  One of the breaking moments came towards the end of the game.  I spent a little under an hour trying to complete the final board game section.  This is something that could be completed within 15 minutes, but the random rolls kept me in what felt like an eternal loop.

In the end, DMC 4 feels like every other entry in the series, but with some fatal flaws.  With the past three games, I played them over and over and loved every minute of it.  I played through DMC 4 once and will be selling it shortly.  I'm glad I only paid $10 for the game.  Anything more would have been ludicrous.
Game Reviews