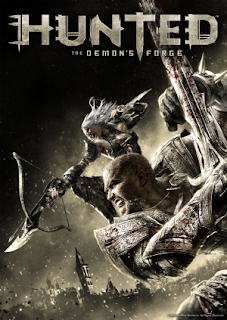 Hunted: The Demon's Forge is a co-op dungeon crawler set in a dark fantasy world.  The story follows two mercenaries, Caddoc and E'lara, as they attempt to unravel an invasion spanning three kingdoms.  Developed by inXile Entertainment and published by Bethesda Softworks, the game was released on May 31, 2011.

Hunted is the story of two mercenaries, the human Caddoc and his elven companion E'lara.  Caddoc has been experiencing haunting dreams involving a mysterious woman with alabastor skin named Seraphine.  Soon enough, his dreams become reality and the two mercenaries must discover why a normally cowardly race, the Wargar, have teamed with their mortal enemies, the Minotaur.  The two races have been enslaving humans from three separate kingdoms for unknown reasons.

The story itself is an interesting one and fun to experience but it is also very predictable.  There are plenty of twists and turns that you can see coming from miles away.  This is all very familiar territory for fans of high fantasy.  Fortunately, the story is told well enough through in-game dialogue and cut-scenes that I didn't mind knowing where it was taking me.  The voice acting is some of the best that has graced this generation and the banter between Caddoc and E'lara really adds much appreciated depth to the two.  It reminded me of a friendlier version of Morrigan and Alistair from Dragon's Age: Origins.  The only unpredictable thing in the story is what flies out of the main character's mouths.  Quite a few times I was caught off guard and left chuckling in the end.

Graphically, Hunted is above average and could even be considered gorgeous if you could see the environments.  Hunted is an incredibly dark game and I was stumbling in the dark more than I should have been.  Even with the gamma turned all the way up, it is hard to pick out details such as buttons, switches, and even three story columns.  While definitely more tolerable than the default setting, I had to constantly go back into the menu and remind the game that the gamma was at max.  Each new level and after some cinemas, the game would revert back to the default settings and yet the slider would show up all the way at the right.

Gameplay in Hunted takes some getting used to.  This is a co-op game and truly, co-op and constant communication with your living partner is the only way you'll survive.  The game can be played with an AI partner, but it is an exercise in frustration no matter which character you choose.  Unlike other co-op games, each of the two characters is unique and plays vastly different.

Caddoc is your generic warrior.  With sword and shield in hand, he charges into the thick of battle to obliterate enemy ranks.  He has three unique abilities to aid him such as a charge, which is handy for closing the gap to archers and destroying shields, a force field that will lift all enemies around Caddoc and slam them into the ground, and a buff that increases speed and damage.

E'lara is an archer who controls the battlefield from a long range.  She can infuse her arrows with magical properties that allow her to adapt to the enemies faced.  Ice can freeze enemies and shields alike, allowing for the next shot to shatter the target.  Fire adds a damage over time effect and Arcane arrows outright destroy armor.

Each of the mercenaries can learn three magical abilities.  Dragon's Breath is a lightning based damage spell that can arc from one enemy to another.  Brimstone shoots fireballs which can be manually detonated or when they make contact with an enemy.  There is also a sigil which will create a sanctuary on the ground and keep out any trespassers for a short period of time.  Each of these powers can be channeled and sent to an ally, giving them a brief boost in combat.

Along the way you'll find new weapons and armor which are paramount to survival.  There are only a handful of models and weapon types, but it's always exciting to find something new to break orc skulls open with.

The game spans a variety of locations.  From villages to sewers to forests and of course dungeons, there's plenty of variety to keep the game from getting stale.  In addition, there are plenty of puzzles which require each player to discover the final solution.  From a time perspective, Hunted doesn't seem to last too long, even if one finds every secret, and believe me, there are a lot of them.  Fortunately, this game has legs with multiple endings and a dungeon editor called the crucible.  Finding gold in the game unlocks new items, enemies, and environments to use in the creation of your custom dungeon which can be played by anyone.

In the beginning, Hunted is an unforgiving game and this leads to a general feeling of frustration from all who play it.  Even on casual, the lowest difficulty setting, you will die.  A lot.  But once you spend some time with it and learn the tricks, it becomes really enjoyable.  Of course, this is all dependent on playing with a breathing partner.  It's a classic type of game to play with someone sitting next to you on the couch.  I wouldn't remotely recommend playing it solo.  But if you're a huge fan of dark fantasy and co-op gaming, then Hunted is a must.  Just make sure to bring a friend.

Kim said…
I very much enjoyed playing this game with you.:) Really miss co-op gaming. It seems that games like these are hard to come by nowadays... and ones that are actually worth playing.
September 6, 2011 at 12:26 PM