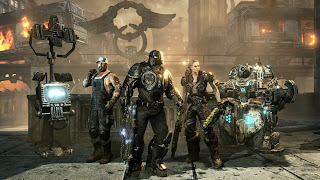 The first Gears of War 3 DLC drops November 1, 2011.  It will include three new maps, three new characters , two new weapons skins, Horde mode upgrades, and 250 acheivements.  The cost of admission is 800 Microsoft Points ($10) or free to those that have purchased the season pass.

Horde Upgrades:
Command Center - A brand new type of fortification that allows you to call in fire support from sniper teams, mortar strikes and even multiple Hammers of Dawn.
Decoy Upgrade - A new fortification level that turns your decoy into an Onyx Guard bot that will fight in your defense.
Sentry Upgrade - This upgrade adds a fire bolt sentry that deals much more damage and is very effective against Berserkers.
Silverback Upgrade - This advancement allows you to upgrade your Silverback exo-suit with devastating rockets and extra levels of repair cost reduction.

This is the first of four planned DLC releases.  You can purchase the season pass for 2400 Microsoft Points and save 33% on the four DLC packs.