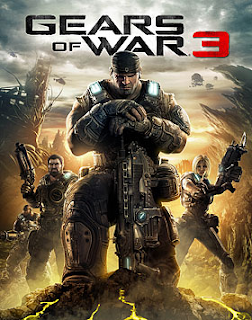 Finally, the Gears of War saga is brought to a close.  With the third entry, we see Marcus and crew battle a new foe, settle the score with an old foe, and wonder what the future will hold.

Gears 3 picks up a year and a half after the sinking of Jacinto, the last human bastion.  Marcus Fenix and friends live aboard a large ship on the open water as the lands have become flooded with the Lambent infection.  The Lambent are life forms infected by Imulsion, the fuel source of the planet Sera.  Shortly after reuniting with Marcus, Dom, and a geared up Anya, the leader of the ragtag army arrives and tells Marcus that his father is alive.  So sets the stage for Marcus seeking out his father and the miracle that will save this broken world.

The story itself is always moving with seldom a dull moment in between all the cover based shooting.  The story is told through traditional means.  You'll fight through increasingly difficult forces and then be greeted by a cut scene that advances the plot.  It's a very guided approach, but one that has always worked well for the series.  There is little room to explore the beautifully rendered world of Sera and little reason to beyond the random trinket.  It's essentially a series of corridors and paths that you must follow to your next goal.

Much like the story telling, there's very little innovation in the combat system.  Now, this isn't a bad thing because Gears has nearly perfected the cover based shooter.  If it's not broken, don't fix it.  There are a few new weapons added in,  like the Retro Lancer, Sawed-off Shotgun, and Digger.  It's enough to keep things fresh and interesting for this go around.  One fantastic new addition is the ability to kick an opponent as you vault over an obstacle.  It is a great way to clear out stubborn opposition.  Other than that, things are exactly the same.

I would like to go on about the graphics, sound, and controls, but I realize there's little point.  If you've played the past two games, you'll know what to expect with Gears 3.  However, Gears 3 is a tight and refined version of the previous games.  Everything just feels right when playing it.  From pulling off the perfect headshot to charging an enemy with the Retro Lancer, it's poetry in motion.

Multiplayer retains all of the the same modes from Gears 2 with a few additions.  Horde Mode has become a tower defense hybrid.  At the beginning of a game, a base must be established.  In between each subsequent wave, you have the ability to fortify said base with barriers, turrets, decoys, and armored suits of death.  Every 10th wave is now a boss wave, pitting you against the toughest foes ever assembled.  Killing enemies gives you money to build and repair said defenses.  While they aren't absolutely necessary in the first 20-30 rounds, the last few batches will push your team and you'll have to build wisely if you want to see it through to the end.

Beast mode is a new mode that puts you in the role of the Locust Horde.  It's like a reverse Horde as you must break through the defenses of the COG and eliminate all of the humans within a certain time limit.  Every kill and piece of destroyed equipment nets you cash which is used to purchase your creature of choice.  After hitting certain levels of money gained, you unlock new creatures to play as.  Make it through 12 rounds and you've won.

Gears 3 differs slightly from its ancestors in that everything is tied together now.  Everything you do in multiplayer and single player is tracked and recorded on your personal stat pages.  Accomplish certain goals and you'll unlock new characters and weapon skins to use in multiplayer.  Unlike the pointless level system for Gears 2, there is a clear reason to level up in Gears 3 as you are properly rewarded for your accomplishments.

Many people cry foul that there isn't much of anything new this time around.  I argue, why should there be?  By the time a game hits number three, you should know what to expect.  Any radical departure from the standard would be nonsense and deter the core player base.  Plus, when a game is as fun as Gears 3, why would you want to change it?

In the end, everything is tied up very well for this series.  There are tragic loses and monumental victories.  There is also a hell of a lot of fun to be had, no matter how you play.  For any Gears fan or anyone looking to get into the series, you can't do better than Gears 3.
Game Reviews