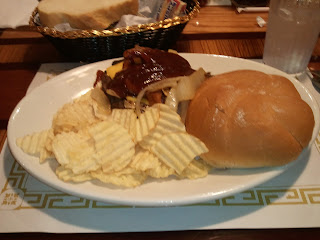 The golden rule when eating at a new restaurant is: Eat the burger.  If they screw up the burger, the rest of the menu isn't worth trying.  The follow up to that rule is: If they've named a burger after the restaurant, eat that.  Pine Street is the latest addition to the town of Burlington.  It follows suit that they be rated on their burger.

I was disappointed that the burger came with the basic and blandest of chips.  A general rule with burgers is that they're served with a hot side.  Fries or onion rings fit the bill well.  I was also shocked that the server called it the "barbecue burger" instead of the restaurant's namesake.  I guess some people just don't appreciate the value of a burger.

The burger itself was quite tasty.  There was no grease to be had, the burger didn't fall apart, and there was a fair amount of flavor to be had.  It was a classic barbecue burger.  All in all, a fairly decent burger.

On the side: Chips

Three out of five stars
The Burger Gourmet