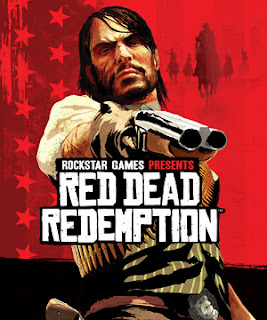 I was never a fan of westerns.  I never cared for the movies, novels, comics, or games.  For all I knew, it was just a bunch of guys with horses shooting other guys or getting into wacky bar brawls.  John Wayne, Clint Eastwood...what's the difference?  In addition, I was never a fan of Rockstar Games.  Sure, I would play the occasional Grand Theft Auto.  However, they had never release a game that I considered "Must have".  Throw those two things together and you have a sure fire winner for something I would never spend time with.

Fast forward to Red Dead sitting in my Xbox tray.  The opening scenes played out and I took interest.  Two hours later after Kim had "accidentally" killed her fourth prostitute, I was secretly plotting how I would play the game in secret.  Secretly.  What can I say?  If a game make sweet sweet visual love to my eyes, I want to play it.  Even if it ends up ruining nearly every sweet memory I have of a series.  I'm looking at you Final Fantasy XIII.

Indeed, the jaw dropping graphics in Red Dead initially turned me on to the game.  From the detail in the individuals wandering the one horse towns to one horse towns themselves and the world surrounding them and even the horse asses themselves, Red Dead is astounding.  Every time I load the game, I'm floored by the visual feast that is laid bare for me.

As I spent time with Red Dead, I was drawn into its story.  The world of John Marston is a complicated one.  The government has torn him away from his family and is forcing him to hunt down his former gang.  Over the course of the game, John is introduced to the many interesting locals of this border state.  As is par for meeting new friends in games, you'll have the opportunity to perform many odd jobs for them.  From herding cattle to hunting bounties, there's no end to what you can do in the wild west.  Straight to the end, I was captivated by this engrossing world and its inhabitants.  And the use of a single song in the ending is so profound and moving that I was left speechless.

Be careful while you roam the untamed wilderness.  There's plenty of resistance trying to stop Marston.  Worst of all are the numerous cougars and bears that will treat your horse as an appetizer as they work their way to you.  Seriously, you will die.  Sometimes your worst enemy is your best friend.    Your horse has a strange habit of dying.  A lot.  It will be shot, run off cliffs, and even fall over dead in the middle of the road.


Even after you've wrapped up the lengthy story and the near absurd amount of side missions, there's a robust multiplayer as well.  Everything you loved in the single player campaign makes a return in multiplayer. There's horse races, shoot outs, poker, co-op missions, and clearing gang hideouts with your friends.

It was something I had never expected.  A studio that I never cared for creating a game in a genre that I had no interest in.  In the end, Red Dead ended up being one of my favorite games.  Did that change my opinion on Westerns as a whole?  No.  Do I believe Rockstar is capable of making great games?  Absolutely.  Do I think everyone needs to play this game?  Definitely.  Saddle up, you have a long road ahead of you.
Game Reviews