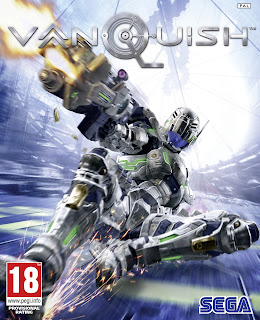 Vanquish is an odd game.  Not Suda 51 odd.  More, the story makes no sense and it's a very different type of game odd.  It's a third person shooter that has you spending more time on your knees than a Thai hooker.  Only half way through, there's a twist that makes no sense and at the end the entire experience has left you very confused.

The story starts off with a Russian force using a giant microwave on San Francisco.  America gets pissed and soon the Russians are in space attacking an American space station.  The president enlists the help of an elite force of generic Marines and one guy named Sam in a power suit that looks like a grasshopper.  The goal is to rescue a scientist for reasons I never fully grasped.  Along the way, it turns out the president was in bed with the Russians and had her top Marine slaughtering his own men and trying to sabotage the hero.  Later, the traitor decides what he was doing is wrong and sacrifices himself so that our hero can continue the mission.  After an entire game of contempt for one another, our hero has nothing but respect for the douche bag that killed hundreds of his own men.  The story makes absolutely no sense and rang strongly of all the cold war propaganda from the 70s.

Unlike the story, combat in Vanquish is an absolute treat.  It's a mix of jetting around at hyper fast speeds, shooting giant robots, and bullet time.  Our hero carries three weapons at a time and two grenade types, fragmentation and EMP.  99% of the enemies encountered are robots, so the EMPs are your best friend.  Sam's suit allows him to jet propel himself around levels until the suit overheats.  Managing the heat in the suit is critical to survival.  Overheat and you'll be on a timer until the suit reaches normal levels.  During this time, Sam can only move at half speed and is very vulnerable.  Once Sam takes too much damage, he'll enter into bullet time which will allow him to take out enemies quicker.  Bullet time can also be triggered manually, but will increase the heat.  Again, it's all about managing the heat.  Once the core mechanics are down and you're comfortable with the controls, Vanquish is a blast to play.

The weapons themselves are your standard variety.  There's a machine gun, a heavy machine gun, sniper rifle, shotgun, etc.  You get ammo from guns littering the levels.  However, you can only carry three, so expect to be swapping and hunting for new weapons if ammo runs low on your favorites.  Guns can be upgraded to have more firepower, larger ammo clips, etc.  You can find upgrades throughout the levels or by picking up the same weapon type for a gun that has max ammo.  The upgrades will degrade over time, so  you'll continuously need to find more.  There's plenty of variety in the weapon types to accommodate any play style and I seldom found myself switching from my favorite three: Machine Gun, Heavy Machine Gun, and Sniper Rifle.

I was blown away by Vanquish when I started playing.  The visuals are spectacular.  Sure, it's a generic sci-fi game, but I love generic sci-fi games.  There were a number of instances where I sat back and said "Wow, this is a really cool game."  However, this wore off around the halfway mark.  There is simply too little going on in the game.  It's a series of rushing from one fight to another with no real reason.  This is largely due to the lackluster story and how little it advances.  Events happen that make no sense and you're left to say "Oh, OK.  On to the next fight."  Towards the end, I was tired of the game.  It's quite literally 10 hours of the same thing.  Fight some robots, hop in a turret, fight some giant robots.  Rinse and repeat.

In the end, Vanquish is a mediocre game.  Once the initial wow factor wears off, it quickly becomes repetitive and a grind.  For $20, it's not a terrible game.  However, play it in moderation.  If beaten over the course of a couple days, it will leave a bad taste in your mouth.
Game Reviews