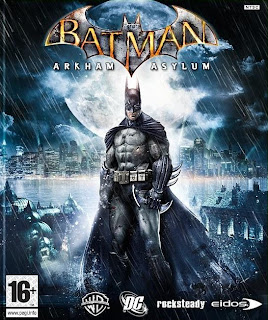 Batman.  The goddamned Batman.  For decades, young boys everywhere have wanted to be The Dark Knight.  Many, myself included, strapped towels around their necks and stalked the hallways of their homes.  For just as long, games have also tried to capture the magic of being Batman.  Most have failed terribly.

The only Batman games I remember playing was the 1993 SNES version of Batman Returns and 1995's Batman Forever.  Both fell under the beat-em-up  category and while very enjoyable, didn't capture the magic of being Batman.  There was no detective work, there was no skulking in the shadows, and no general sense of them being Batman games.  Sure, you could play as Batman, but you could swap Batman out with Mike Haggar and not know the difference.  2009 would see a dramatic change.

The game begins with the Joker's capture and escort to Arkham Asylum by Batman himself.  With the help of Harley Quinn, the Joker manages to escape and take control of the asylum.  Kevin Conroy, Mark Hamill, and Arleen Sorkin reprise their roles as Batman, Joker, and Harley Quinn respectively.  The entire game takes place on Arkham's grounds and revolves around Batman trying to stop the Joker.

Visually speaking, Arkham Asylum is astounding.  The amount of detail is this game is awe inspiring.  From the seams on Batman's suit and the stubble on his face growing as the game progresses to villain memorabilia scattering the buildings in the facility, there's so much to see and take in.  Batman in designed in a realistic way with a functional set of armor instead of the sweats he wears in the comics.  Joker has patches in his suit presumably from the many scuffles he's been in with Batman.  The walls in the buildings seem to bleed a barely controlled insanity.  This is Batman in his natural environment and it just feels so right.

Controlling Batman is also what makes this game so great.  Batman isn't a thug.  He's a detective, a predator that stalks the shadows, and most important of all, he's human.  Batman must stay in the shadows to survive. As the game progresses, guns become more prevalent.  If you get shot more than a handful of times, you will die.  To take down groups of enemies, you must hunt in the shadows and eliminate the armed prisoners one by one.  However, the entire game isn't limited to stalking targets one at a time.  On multiple occasions, Batman will find himself in the midst of a small army.  Here is where the combat truly shines.  Batman moves and flows like water from foe to foe.  The entire fight, if done properly, is like watching water flow back and forth and come crashing down with great force on the heads of these criminals.

Mixed in between the combat, Batman must traverse the Arkham compound.  This is done by using many tools that are unlocked through the game.  From grappling hooks to and explosive gel used to destroy key walls, there's a great deal to uncover.  Spread around are numerous trophies left by the Riddler, interview tapes, and character profiles.  Finding all of them will require dedication, but the rewards are great for those willing to put in the time and effort.  To make things a little easier, Batman can turn on a "detective visions" which allows him to see through walls and see hidden clues.  It's such a useful tool, it would be incredibly easy to play the entire game without turning it off.

The controls for the PC are laid out in an odd way and I found my pinky doing more work that it is used to. There was some cramping and it never felt natural.  I didn't get the chance to play with a controller, so I'm not sure how the controls would translate.

All in all, Arkham Asylum is the first truly great Batman game.  Any fan of the Dark Knight should play this game and even non fans should give it a whirl.  A great game will shine regardless of who the main character is.
Game Reviews