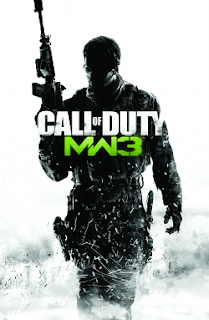 Modern Warfare 3 wraps up a trilogy that has spanned the past four years.  Questions finally get answers.  Buildings blow up.  People die.  Most important of all, I finally take an interest in the series.  No, not really.

As far as story telling, Modern Warfare 3 doesn't fare much better than your standard action movie.  It's a B grade plot with predictable twists and turns.  I'm being dead serious when I say that nothing should come as a shock as the game progresses.  The story moves along at a break-neck speed that sweeps you from New York to London to France and more.  But because you're only shooting Russians (again) in the face, there's not much to tell the settings apart.  I suppose there's the Eiffel Tower, but then that gets blown up.  All in all, it's just lazy story telling.  Most first person shooters are guilt of this these days.  There's a global threat and the only way to stop it is shoot Russians in the face for seven hours.

Graphically, MW3 is the best looking game in the series.  Everything pops and I'm constantly impressed at how sharp everything appears.  That is, until you get close.  There's very little texture to everything beyond your character's arms and their weapon.  Sometimes, when you get close to some objects, they look like PS1 era graphics.  Don't believe me?  On the 360, get close to the fallen statue in the map Arkaden.  Ugly as sin.  Plus, where the hell are my character's legs?  This is unforgivable that in this generation of gaming, most developers won't bother putting legs in.

Gameplay  in MW3 is exactly the same as previous entries.  The idea being, "If it's not broken, don't fix it."  However, there are some features that seem to be missing.  Some innovations from Black Ops that didn't make the cut, like custom emblems.  I'll miss the vulgar emblems that adorned the scoreboard and guns.  Now I'm stuck with a boring cookie cutter emblem and title again.  Wager matches are gone.  Sticks and stones will forever live on in my heart. A third category for equipment?  No.  Why should I have to replace my frag grenades with a claymore?  Don't be a dick CoD.  Let me have both.

MW3 isn't all disappointment.  Now, my lackluster kill streaks don't stop when I die every five seconds.  In fact, they're not even called "Kill Streaks" anymore.  They're called "Point Streaks".  Plant a bomb in Search and Destroy or shoot down a UAV and get a point.  There's also the choice between three packages: Assault, Support, and Specialist.  I switched to the new "Support" package and keep my team up and running with such assist perks as UAV, Counter UAV, Remote Turrets, SAMs, etc.  Assault functions like kill streaks always have.  Specialist rewards you with perks and plays a lot like last few seconds in Black Ops' wager matches throughout your games.

Also thrown in are weapon based perks.  Each weapon levels up individually.  The more you use it, the better it's going to get in terms of perks.  Some examples include: tighter grouping of shots, reduced kick, automatic breath hold when using sights, ability to use two attachments, etc.  It's a nice incentive to stick with one weapon and become proficient.  Plus, it keeps one from wasting perks for a specific weapon like in Modern Warfare 2.

Despite the lack of any significant change or any real innovation, CoD is still digital crack.  It's simply fun to play.  Well, for most people.  I don't see the appeal myself.  I'll play, but only due to the peer pressure of my Xbox Live friend's list.  There's too little innovation to the series to warrant buying it every year.  It's a good game, but it's hard not to be burned out by the annual rehashes.  If you're a fan of the CoD series, you know what you're getting yourself into.  For those new to the series, this is a good place as any to start.