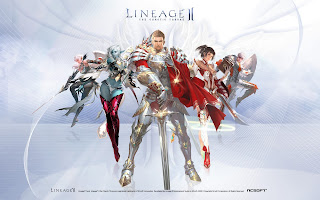 
"Lineage® II: Goddess of Destruction™—truly free! Why play a free to play MMO with account or game limitations when you can play Goddess of Destruction truly free? We've added free packs to help you level faster, and a new in-game store loaded with useful items to enhance your play experience.
Lineage® II: Goddess of Destruction™ becomes truly free later this year. Experience the large-scale castle sieges, clan wars, and head-to-head Olympiad competition that madeLineage II famous. "Truly free" means no separate account types or blocked game content—everyone is treated like a VIP! Other than the in-game store items, all game content (character creation, races, classes, skills, zones, bosses, quests, clans, crafting, warehouse, auction house, chat, mail, forums, customer support, and so on) is absolutely free. And the Goddess of Destruction update offers roughly four times faster game progression and over 400 hours of deep, rich gameplay!
The L2 Store™ will offer items to supplement your gameplay in the form of XP/SP boosts, potions, buffs, and other consumable supplies, as well as cosmetic items and hunting helpers. In addition, you can purchase packs that accelerate character leveling for a longer period and contain exclusive items not available for individual purchase. But you never have to purchase anything from the L2 Store in order to enjoy the game mechanics or story content of Lineage II. "Truly free" means exactly that: Buy only what you want, or play all the way to level 99 without purchasing anything. It's your choice. Play your way!"


I used to play Lineage 2, but the lack of a community and the grind heavy nature turned me off o the $15 monthly fee.  Now that it is free I imagine I'll be spending more time in the land I never got to know.  However, NC Soft has had free to play games before.  Dungeon Runners and Exteel were two fantastic games that have had their servers shut down due to poor returns.  Hopefully Lineage 2 and City of Heroes can avoid that fate.