Rusty Hearts is a free-to-play MMORPG developed by Stairway Games and published by Perfect World Entertainment.  The game had entered a closed beta on July 27, 2011 and was finally launched on September 13, 2011.  Rusty Hearts is a very story driven game that follows four characters in their quest to vanquish Count Vlad.  It has a very unique style and promises an equally unique experience.  Will this newcomer to an already overcrowded genre truly bring something special to the table or will it fall by the wayside like so many others?

The first thing many players will notice about Rusty Hearts is its unique cel-shaded, anime style.  I’ll admit that it was the first thing that drew my attention.  It’s a refreshing new take on the MMO market.  The overall design combines visual elements of many styles.  From Gothic to Victorian to Steampunk and Medieval, there’s something for everyone.  It’s all presented in a very aesthetically pleasing package that is sure to seduce anyone that gives it a try.  It looks like someone fleshed out a 2D Castlevania and turned it into an MMO.  The best part of all is that the game is very resource friendly.  It doesn’t demand much of a machine to run at the highest settings, so there’s not much excuse not to try it. 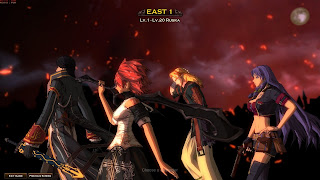 Trying it is something you’ll want to do.  Rusty Hearts is unlike any other MMO I’ve ever played.  The game is played almost entirely on the Keyboard alone.  The only time a mouse is used is for moving items in the inventory or selecting chat options with NPCs.  Even then, the mouse is not necessary.  Movement is handled entirely using the arrow keys and attacks are bound to the left side of the keyboard.  It’s a very odd layout that took some time to get used to.  However, after the first few hours, everything fell into place.  Rusty Hearts also allows players to connect a controller and based on the layout, I can only imagine that it would feel very natural to play with a controller.

The game itself plays very similar to titles like Devil May Cry and Bayonetta.  It is a fast, action-packed game.  Standing around trading blows like in many other MMO’s will lead to certain death in Rusty Hearts.  Right after the visuals, the game play is what hooked me.  The combat is lightning fast with a plethora of enemies on screen at any given time.  Unfortunately, the game itself isn’t terribly challenging.  I’ve been playing for a few weeks now with each of the characters and I haven’t been afraid of dying once.  Even on Very Hard mode, it’s not impossible to solo every instance.  This is a good and bad thing.  Since the dungeons are bite sized, it’s easy to drop in and complete and instance within 10 minutes.  There’s no need to find a group, no tanks or healers, and generally none of the headaches associated with your standard MMO dungeon crawl.  But, there’s not much challenge to the game.  I never felt any sense of accomplishment or challenge when running an instance.

There is a central hub that connects all of the dungeons in the game.  NPCs will hand out quests and players make their way to a dungeon.  Each dungeon is broken up into several portions that have level requirements to enter.  Each portion also has multiple difficulty settings.  Dungeons can be played on Normal, Hard, Very Hard, and Blood Mode.  To unlock higher difficulties, each level of difficulty must be completed progressively.  Blood Mode is different in that players won’t get experience inside, but better items instead.  After selecting the section of dungeon and the difficulty you want to play, you’re placed at the start of the instance.  Each instance is broken up into sections which must be cleared of enemies in order to progress.  At the end of each instance is a boss that must be defeated.  After all of this, players receive a ranking from “F” to “SSS”.  This ranking is based on a number of factors.  These include how long it took to complete the instance, the Style Points acquired, and hits taken.  After completing a dungeon, players choose a random card for a reward.  This could be gold, armor, or weapons.  The quality of the items is determined by card found in the dungeon.  Players can pick up bronze, silver, or gold cards which will replace the random cards at the end, thus increasing item quality. 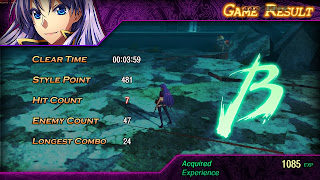 In addition to finding items in dungeons or purchasing them in shops, players can craft their own.  Materials are dropped from fallen enemies.  Each NPC can craft certain types of items.  For example, Gina can craft Fabric and Leather armor, and Ruska can craft Chain and Plate armor in addition to weapons.  Equipment can also be upgrading using stones and other items that fall from enemies.  There are specs and perks to equipment that will benefit characters when equipped.  These effects can be enhanced when the equipment is upgraded.

Of course, players don’t have to build their own equipment.  There is a thriving auction house in place which makes it easier for those who don’t want to hunt down particular ingredients for that next great costume or weapon.

As I said before, Rusty Hearts is very story driven.  Throughout the entire game, there is a story that is being told.  The story revolves around Count Vlad being imprisoned in Castle Curtis by the local militia.  Count Vlad, like his name suggests, is this world’s equivalent of Dracula from Castlevania.  His best friend is Death and he has a castle full of monsters that need to be eradicated.  The story begins with Frantz and Angela arriving in town and grows to incorporate every NPC you meet.  It’s a tight, well told tale that urges players forward to find out what happens next.  There’s plenty of dialogue to be had when picking up quests and when playing through a dungeon.  There are numerous cutscenes which will cover larger events.  Along the way, the story will unravel and tell secrets that other NPCs won’t let you in on.  There are hidden agendas and secret plots and I have to admit that I’m hooked.  I want to see how everything will play out in this quest to exterminate Count Vlad.  The only complaint I have is that sometimes the dialogue boxes will move to quickly when in a cutscene, making it hard to read everything that is going on.  While this shouldn’t be a problem with the superb voice acting in most cases, Rusty Hearts suffers a few more issues.  The voice acting will overlap and characters frequently talk over one another or will be cut off entirely.  It doesn’t make the story any harder to follow, but the presentation is sloppy at times. 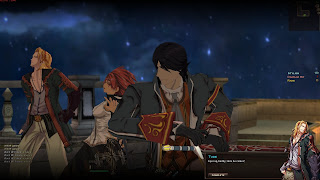 Of course any story is only as good as the characters detailed inside.  Initially, there are four characters available to players.  Each character can wield one of two weapons which will significantly alter how they play.  Add in costume pieces that can be equipped and each character can become wholly unique to the player controlling them.  Players begin the game by picking one of the four characters; however there is the ability to create four of each character.  The current level cap in the game is 39 and thus the game has a great deal of replay value.

Frantz is a human/vampire hybrid who wields either a sword or axe.  He is looking for his long lost fiancé who was turned into a vampire by himself.  He catches a glimpse of her in Castle Curtis and suspects that he may be able to save her in addition to ridding the world of Count Vlad.  He is the strong, silent type and plays out as the stereotypical anti-hero.

Angela accompanies Frantz early on in his quest to eradicate Count Vlad.  She can equip either a large sword or scythe.  She is a young witch from a small village whose soul was forged with the ancient possessed sword, Graestra.  Once the two merged, Angela’s hair turned red and spiky and her magical abilities surpassed those of even the most experienced witches.

Tude is a wanderer who found himself trapped in Castle Curtis when the Golden Seal Team erected the barriers in order to trap Count Vlad.  Frantz and Angela discover Tude while exploring the castle later in the game, although his available for play immediately.  Tude was attacked long ago by a wolf and though he was able to fend off the creature, a tooth broke off in his chest.  One of Tude’s arms turned into a claw, which he keeps in a bulky gauntlet.  Tude fights using either the gauntlet or the claw it contains.

Natasha is a con artist who travels from town to town with her sister.  They stage fake monster attacks which result in Natasha saving the day.  Things are a bit different for Natasha at Castle Curtis.  The many monsters inside killed her brother, thus setting Natasha on the path of vengeance.  Natasha can dual-wield revolvers or use a musket.

Each character brings something unique to the game and is truly enjoyable to play.  Frantz is a fast, strong striker who makes quick work of enemies with his blades.  Angela is a slow, heavy hitter with her sword and can wreak havoc with her magic.  Tude is a melee tool of devastation.  Natasha is a ranged character with the ability to set mines and turrets.  I truly believe there’s a character for anyone and challenge you to find one in Rusty Hearts that isn’t sublime to play.

There are additional characters that will be added to the game in the form of Avatars.  Meilin Chen is the first Avatar to be released and is a stand-in for Tude.  She uses his weapons, equipment, and skills.  The next two characters have been hinted at.  Edgar is a young boy who will stand in for Angela and Roselle is a buxom beauty who can be played in place of Frantz.  Each of these Avatars can be purchased from the cash shop either in-game or on the Rusty Hearts site.

In the end, I’m supremely happy that I found this free-to-play gem.  It provides an atmosphere of the classic horror films filled with colorful, anime inspired characters and strangely enough, it works.  The gameplay is solid and a blast to play.  The haunting sound track combined with the rock-opera music when fighting is a perfect fit.  The story and characters will draw anyone in who gives it a chance.  There’s a lot to be had in Rusty Hearts and I wholly recommend it to anyone looking for something different to play.
Game Reviews