Apocalypse has come...Again.  Maybe you're getting tired of saving the world over and over but at least, this time, there are zombies.  Zombies are fun!  They are dead people, ok, but they will never say no to a good dinner.  They love taking long walks and they don't care about your weight, your hair, or the color of your skin...All they want is your brain.  Unfortunately, people in this game don't think this way.  That's why you'll help them fight these cute un-dead creatures.

This is an exciting tower-defense based game in which you'll control a group of five survivors to prevent their fortress from being overtaken by zombie hordes.  But this is not the usual tower-defense experience, there are many minigames that will blow your brains out.  So, maybe, it's time to say Bye Bye Brain." 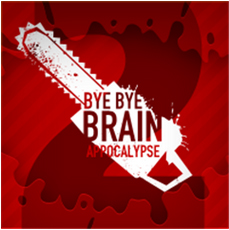 Bye Bye Brain: App-ocalypse caught me by surprise.  I didn't know what to expect when I found it, but the high rating and quirky graphics convinced me to download the title.  Well, it was those two factors and the fact that it is free.  Despite being free, BBB:A is one of the best games available on the Windows Phone Marketplace.  The game was published by Weekend Game Studio and released on January 8, 2012.

BBB:A is a zombie-themed tower defense game.  The objective is to keep the ever advancing horde of zombies from reaching your hideout.  To do this, you must amass an army of survivors and plant them in the zombies' path.  There are five survivor types.  Each fills a specific role and having at least one of each is essential for making it to later levels.  Each survivor can be upgraded twice, thus improving their abilities.

The survivors aren't the only ones responsible for defending the base.  It falls directly on your shoulders to take out zombies as well.  By flipping the phone upside down, the perspective switches to the first person view of a survivor on the roof.  From this vantage point, players can tip and tilt the phone to gun down the swarming undead. 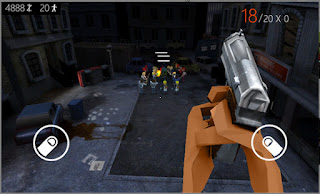 There's a handful of maps to play and two game modes.  Survival mode will spawn endless waves of zombies.  Story mode...well, I'm not sure what story mode is exactly.  I've been playing for some time now and I've yet to complete a level, if there are any.  BBB: A is brutally hard.  Zombies come in all shapes and sizes and must be dealt with accordingly.  There are slow and fat zombies who can soak up damage.  There are anorexic yuppie zombies who can sprint to your base, but have very low amounts of life.  There's also plenty of zombie types in between.Of course, as each wave passes, the zombies grow stronger and harder to kill. 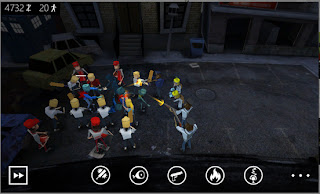 What makes BBB: A stand out is the shop.  Cash from the game modes carries over.  You can choose to spend all of your money in matches upgrading survivors and buying ammo, or you can hoard it and save up for better weapons.  There are many upgrades available for both survivors and the player's character.  These upgrades are permanent and in the long run make the game considerably easier.

The graphics in this game are some of the best that I've seen on the Windows Phone platform.  The design is fantastic and I love the references to such cult hits like Doctor Who and Shaun of the Dead.  It was nice having the option to change the camera angle.  The default view (as seen above) can make it hard to properly place survivors.  When using the top-down view, it's considerably easier to build your human funnel.

The sound is good, but can get old very quickly as it is quite repetitive.  In later waves where there are multiple survivors and zombies of each type, the same sound effects will play over and over.  For extended play sessions, it's best to mute the volume.  But make sure to hear the catchy theme song.  For a free game, this has one of the snazziest opening themes I've ever heard.

Again, Bye Bye Brain: App-ocalypse is one of the best games I've played for Windows Phone.  It's a great spin on the tower defense genre, and has lasting appeal with the quick sessions and carry over weapons and upgrades.  The fact that it's free only makes it better.  This is a must have game for anyone who owns a Windows Phone.