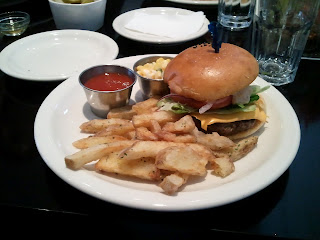 Verdict:
An international burger review?  No way!  While overseas, it was a goal of mine to find a burger joint and see South Korea's spin on an American staple.  Thanks to the kind folks at Webzen, this dream became a reality.

Restaurants in South Korea are definitely classier than what I'm used to in the States.  Everything is quite clean and the staff is well dressed and very courteous.  Honest Grill was no exception to this rule.  It had a modern design style with tiled walls, sleek booths, simple lighting,  and metal furnishings.

There was a large variety of burgers to be had, but when trying any new restaurant, I like to keep it simple and stick to the basics.  As such, the Cheeseburger was a great place to start.  The burger had all of the traditional toppings that make up a good burger: lettuce, tomato, onion, and cheese.  Where Honest Grill's interpretation kicked in was its two special toppings.  The first was a creamy type of coleslaw.  It was very sweet and loaded with vegetables like corn.  It gave the burger an...interesting texture.  Topping the whole burger off was a sauce consisting of ketchup and something spicy.  It didn't have the bite and flavor of Tabasco, but it kicked things up a notch.  The sauce was thinner than ketchup and did clear the sinuses.

Overall, it was a good burger with a unique spin.  I don't know that I would order it on a regular basis if it was available, but I'm glad I had the chance to eat it.

On the side:
An ample serving of seasoned fries that helped to take the bite off the burger's sauce.