It looks like everyone's favorite Merc with a Mouth is getting his very own video game.  Developed by High Moon Studios (Darkwatch, Transformers: War for Cybertron, etc.) and published by Activision, the game is slated for release sometime in 2013.  Hopefully that Mayan apocalypse is off by a few years.  The debut trailer shows appropriately over-the-top action that falls in line perfectly with Deadpool's character.  There's not much shown in the trailer beyond a few nods to previous Marvel titles, terrible jokes, and Deadpool slaughtering hapless individuals.  However, at 0:55, we catch a glimpse of what could be the psychic assassin, Psylocke.  How does she fit in?  I couldn't even begin to guess. 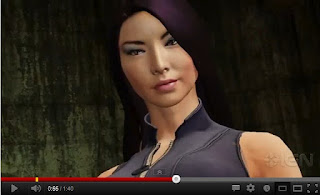 A Deadpool game was one of the last things I was expecting to be unveiled at SDCC, but I'm not one to look a gift horse in the mouth.  Hopefully it turns out better than some of Marvel's recent titles.