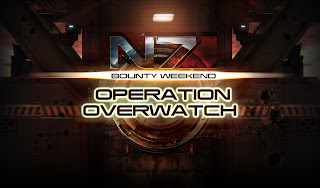 BioWare has unveiled the tie-in weekend operation for their Earth DLC that was just released.

Squad Goal: Extraction on any difficulty with at least one squad member using an Earth Pack character.

Allied Goal: Extract 800,000 individual players on any difficulty, with each live member counting toward the goal.

Requirement: Mass Effect: Earth must be installed to earn these rewards."