Create Your Own Weapon in Dead Space 3

Another new feature has been revealed for upcoming title, Dead Space 3.  Players will now be able to use Isaac's engineering know-how to do more than repair ships and disable security systems.  Using parts collected scattered about, Isaac can craft exciting and deadly new weapons.

To help Isaac in his fight, two weapons can be combined into one, like a plasma cutter with a force cutter strapped to the bottom.  Players can also share the blueprints of their custom weapons so friends can build their own or tweak it to fit their own personal play style.

To celebrate this exhilarating new feature, developer, Visceral  Games, is allowing players to build their own weapons on the Dead Space site and submit it.  Visceral Games will then select one design and feature it in the game.  While all weapons should be craftable once the game comes out, it's still exciting to think that your weapon was the best of the best.  So get building!  The contest ends September 1st. 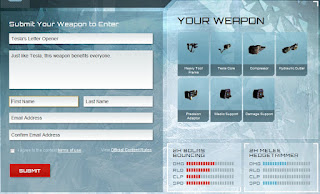