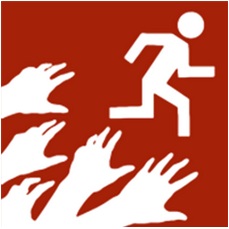 Day three begins and I'm finally on mission two.  Today's mission consists of the lead runner, Runner 7, taking me on a tour of Abel's perimeter.  Runner 7, Evan Deaubl, has become the head of runners simply because he has survived the longest.  When your job is to recover supplies from a zombie infested city and use yourself as live bait to protect other, the life span is understandably short.

The run was going well.  The music still overpowered any in-game cues, so yet again, I had to visually check each vibration my phone made.  Halfway through the run, I picked up an item and the music cut out.  The timer was still running, but the pace wasn't functioning properly.  That's nothing new however.  Many folks have complained that it doesn't work and I personally haven't seen it work.

I ran for some time, hoping that the issue would resolve itself.  I paused and started the mission, but it never kicked back over.  I finally had to stop the mission and restart it.

The mission played through without further interruption.  It was quite uneventful.  Some military supplies were recovered, some zombies evaded, and Runner Five lives to see another day.