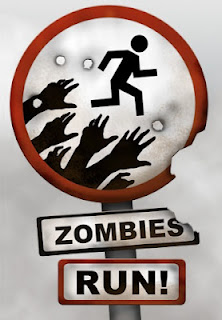 To clear up any confusion as to what Zombies, Run! or this experiment is, I'll add basic information for the app at the end of each article.

Day six was an excellent continuation of day five's run.  The app held steady and I was able to blast through missions five and most of six thanks to my playlist consisting of shorter songs.  The plot thickens and more questions about Runner Five's past surface.  Much like any other zombie survival scenario, I'm starting to feel safer around the zombies than other survivors.  The impeccably crafted story continues to pull me as it slowly unravels.

I had taken two days off since my last run in an effort to rest my legs and allow my body to rebuild.  I was feeling good until a 1/4 of the way into my run.  My legs cramped up with tremendous pain.  Clearly I haven't been stretching enough and the sudden three mile runs have caught up with me.  As my legs locked up like a gorgon's victim, I hobbled and limped my way home, cutting my run in half.  While I'm getting better to adhering to Rule #1, it appears I've let myself go too far and my body is fighting back.  Until the damned awful pain lets up, immediate updates may be sporadic.