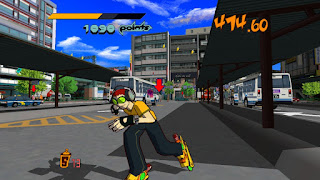 One of my absolute favorite games for the Dreamcast was Jet Grind Radio.  Originally released in 2000, the game was groundbreaking with its use of cel-shaded graphics and revolutionary gameplay.  The game has been revitalized and given a facelift to transition to the HD era of games.  It's definitely not the prettiest thing to look at, but it's just as much fun as I remember.  Join me in this fun trip down memory lane.  It's on XLBA for 800MS Points ($10).