Mass Effect 3 Gets a Watch? 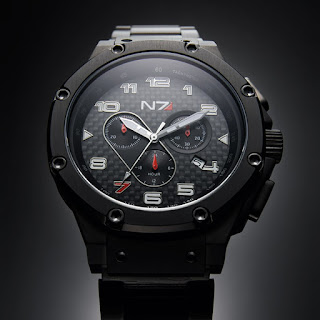 Every gamer knows that time tends to disappear in large quantities every now and then.  This is especially true for the utterly fantastic Mass Effect 3 multiplayer.  Now 500 fans can get their hands on this extremely limited edition N7 Ambassador watch.  That is, if they're willing to shell out $475 for it.

The watch is manufactured by independently-owned watch maker, Meister Watches.  It features:

Now I don't wear a watch myself, and while I can appreciate this well crafted Mass Effect themed piece, I can't imagine many folks willing to part with $475 for a watch.  I was tempted when I saw $150, but after realizing that was just the deposit, I cringed.  It may be a fine watch, but I have a hard time believing it is worth nearly $500.  Those who aren't as cheap as me can order theirs now and expect the watch to ship mid-December of this year.