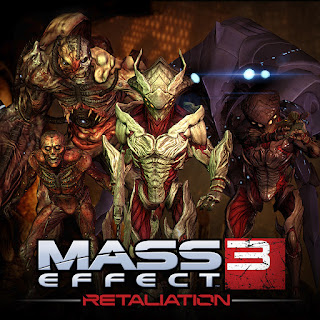 Mass Effect 3 is set to get it's biggest free update with Retaliation.  Retaliation is free DLC for the multiplayer mode and goes live Tuesday, October 9th (October 10th for PS3 in Europe).

The Collectors have joined the fight as a new enemy faction.  Their forces consist of the Praetorian, Scion, Abomination, Trooper, and Captain.  The Geth have also bolstered their ranks with new Drones and Cerberus has enlisted the Dragoon.

Players get to take the Turian Havoc Soldier and Turian Ghost Infiltrator into battle with the promise of more classes being added on a regular basis.  Collector weapons including the assault rifle, sub-machine gun, and sniper rifle have also been added.  In addition, all weapons are getting new ammo modifications and armor is seeing several unique upgrades.

Retaliation also features a new Challenge database.  This database tracks in-game statistics, such as weapon usage.  Players earn challenge points by completing mini-goals such as accumulating 140,000 points while using the Typhoon rewards the player with 10 challenge points.  These points are used to unlock in-game bonuses such as titles and banners.