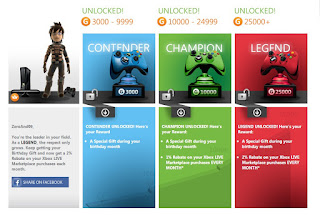 Xbox Live has rolled out another addition to their Xbox Live Rewards program.  Called MyAcheivements, the system rewards players based on the once pointless Gamerscore.  There are currently three ranks to be earned with each rank giving another award and rewards to players.

Contender is unlocked at 3000 Gamerscore and awards a "special gift" during the player's birthday month.  This special gift has been confirmed by many to be 20 Microsoft Points.  Four birthdays will net you enough points to buy your avatar a shirt.  Still, it's better than nothing and you can't say that Microsoft never got you anything for your birthday.

Champion is unlocked at 10,000 Gamerscore and in addition to the birthday gift, players get a 1% rebate on Xbox Live Marketplace purchases every month.

Legend is the third and final tier and is unlocked at 25,000 Gamerscore.  Players retain their birthday gift and see an increase in the rebate for Xbox Live Marketplace purchases from 1% to 2%.

While it's not much, there's at least some incentive to build Gamerscore.