November 15, 2012
For those that have upgraded to or purchased a Windows Phone 8, you may be wondering how to get your music, pictures, and other data from your PC to your phone.

For those not wanting to upgrade to Windows 8, it's not clear in the slightest on how to sync your content.  Most references direct users to connect their phone via USB to their PC and use the file browser to move and organize data.  While I'm no stranger to managing data in such a manual way, it's not the best way to handle it for a lot of people.

Microsoft has released a Windows Phone app for desktop that is currently in beta.  The app will only work with Windows 7 and Windows 8.  Users running Vista need to get with the times and upgrade their OS.

The app works like a stripped-down version of the Zune software and allows users to sync their music, pictures, videos, and ringtones with their phone.  At the bottom of the app is a visual representation of how the space on the phone is divided up.  It's incredibly bare-boned, but it's better than using the file folders to manage everything. 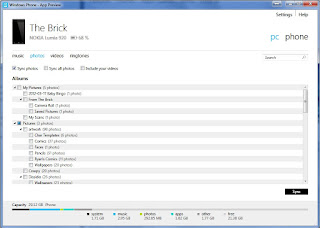 The app isn't perfect and that's to be expected from anything in beta.  It has a hard time recognizing when the phone is plugged in and then has some more trouble recognizing when it's unlocked.  But when it works, it works well.  What's even better is that Mac users aren't left out.  There's an app for them too.  What kind of masochist would use OS X and Windows Phone 8?  I can't imagine a worse Hell. 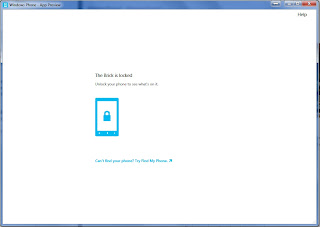 Hopefully this helps other early adopters of Windows Phone 8.  A big thanks goes to NokNok.tv for putting up the story.